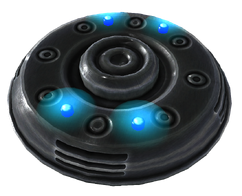 The cryo mine is a mine that is added to Fallout 3 with the Mothership Zeta add-on.

The cryo mine deals a single point of damage to its target, but also freezes them solid for 3 seconds.

These mines can be obtained from Elliott Tercorien after releasing him from stasis and going through the cryo lab with him. He will pick up some cryogenic parts in the area where Beckett and Daniels are frozen which enables him to start making the mines upon return to the engineering core. He will give the Lone Wanderer three cryo grenades and three cryo mines after they wait an hour for him to make them. After that one must wait another 3 hours for him to make two more each time the Wanderer asks.