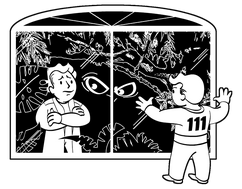 A House Divided is an Institute side quest in Fallout 4. This quest occurs after Father declares the Sole Survivor his successor, when Dr. Higgs and Dr. Loken decide to protest the Sole Survivor's promotion by locking themselves in the Institute BioScience Laboratory.

Speak with Newton Oberly in The Institute. He'll tell the Sole Survivor that Max Loken and Lawrence Higgs locked themselves in the BioScience lab and cut off the Institute's food supply in protest of Father's decision to make them his successor and refuse to come out. After suggesting to reason with them, he opens a side door that leads to the BioScience observation room and gives the Survivor the BioScience systems access holotape. Head through the hallway and eliminate the defending synth guards found in the first room. In the next two hallways there is a laser turret in each. One can either proceed to the observation room designated by the quest marker to speak to Lawrence, or they can make their way through the FEV Lab and bypass dialogue in the observation room, this will result in missing out on speech check experience points and a like from X6-88 (if he is the player character's current companion).

Once in the designated room with the terminals and observation window, the Survivor can either talk Lawrence down with two persuasion attempts (the first attempt is more difficult), or the situation escalates and a fight will ensue. To gain access to the lab, which can be done without initiating dialogue at all and that becomes a necessity if the dialogue fails, insert the systems access holotape into any one of the terminals in the room or the Pip-Boy. From the overridden terminal, the options to "shutdown turrets," "release specimens" and "open lab door" will be offered. If one went through the FEV Lab, they will be at this step already. Note that at this point, Lawrence is hostile and will attack as soon as the Survivor enters the lab. The "release specimens" option releases the gorillas in the lab, which will attack and kill all inside (including the Sole Survivor), proceeding the quest without the Sole Survivor needing to do so themselves. Take the key from Max's corpse to open the door to Hydroponics. If the options to "shutdown turrets" and "open lab door" are selected, only the synths inside the lab will be hostile. After they are defeated, one can then talk to Lawrence again and during conversation, Max will talk Lawrence into surrendering. This is one peaceful way to resolve this quest without passing the speech checks.

After Laurence has either been talked down, or everyone in the lab has been killed, take Lawrence's security override password and open the shortcut door back to Newton. Alternatively, if Max persuaded Lawrence to surrender, they will walk to the door and open it. Max will place himself and Lawrence under house-arrest. After either of these events happen, walk outside to the main Institute area to talk to Newton. He'll express regret if any violence took place, and comment that funeral arrangements should be made. If Lawrence was talked down, the Survivor will be asked to decide his and his colleague's fate. The disciplinary actions available are to take no action to punish them, put them on probation, exile them from the Institute, or have them executed. If spared, Newton will reward the player character with chems and take back the BioScience security override holotape. If their execution is ordered, there is no additional reward, but the security holotape is kept by the Sole Survivor.

The name of the quest is a reference to Abraham Lincoln's famous quote "A house divided against itself cannot stand." Lincoln quoted this from the Bible [Mark 3:25].