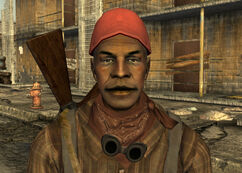 Klamath Bob is a merchant living in Westside in 2281.

Klamath Bob is the store owner of Klamath Bob's Liquor Store in Westside. As the name implies, Klamath Bob is from Klamath. He helps defend Westside from Fiend attacks at night, and he tried helping Mean Sonofabitch (by offering to purchase him) when the mutant was being mistreated by the New California Republic.

When asked about Klamath, he will mention that a "tribal" visited back before he was born, and will reference several events from Fallout 2.