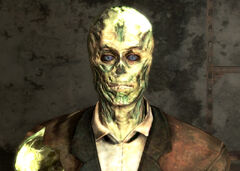 Jason Bright, the leader of the Bright Brotherhood

“We wish to escape the barbarity of the wasteland, especially the violence and bigotry of its human inhabitants. The Creator has promised to my flock a new land: a place of safety and healing... a paradise in the Far Beyond.”— Jason Bright

The Bright Brotherhood is a religious faction in the Mojave Wasteland in 2281, based in the REPCONN test site west of Novac.

A strange cult of ghouls, and a single human fully believing himself to be a ghoul, the Bright Brotherhood is led by a charismatic and prophetic glowing one named Jason Bright. He never turned feral, and has instead built up a small following of like-minded ghouls, clad in the vestments of a tribe in the final stages of preparation to leave for a "new world"; a promised land foretold by Bright, that is the ghoul's ultimate goal.

Some time in the past, Chris Haversam came to the facility believing he was a ghoul. Even after pleading with him, the other followers were unable to convince him that he was actually still a human.[1] Thus, this makes him the only human follower, although he was not allowed on the ship for the "Great Journey," which Bright says is the will of the creator.[2][3] Jason also believes that it is no coincidence that two humans were instrumental to the success of the Great Journey, as it was the will of the creator and it is his blessing.[4] He believes that the creator sent the Courier and Chris to expiate the sins of the bigoted humans. For helping the Brotherhood in making the Great Journey possible, they made Haversam a saint of the Brotherhood.[5][6]

Shunned by frightened outsiders, and murdered by nightkin who are convinced the Brotherhood are sitting on a mythical shipment of Stealth Boys, the Brotherhood have long come to realize that they are not bound to, or long for this earth. To escape the barbarity of the wasteland and bigotry of humans, the Brotherhood seeks to escape to the "Great Beyond" and place of safety and healing.[7][8] They intend to get to their promised land on their "Great Journey" which involves bringing REPCONN rockets back up to code and blasting off into orbit.[9] The Brotherhood was close to getting the rockets functional, but nightkin invaded the facility and have kept them away from the launch site. Even if the Brotherhood could get to the rockets, they are still missing rocket fuel and functional thrusters.[10] Should the Courier rid the REPCONN facility of the "demons," the Brotherhood will be able to continue with their plans for the Great Journey and go to their "sacred site" in the basement of the facility, where the rockets are held.[11]

Jason Bright is the leader of these ghouls who blindly follow him. Chris Haversam is the human, who has convinced himself that he is a ghoul, who is in charge of most technology and the rockets required for the "Great Journey."[12]

For a nonviolent, religious faction, the Bright Brotherhood is surprisingly well-armed. Almost all of their members carry some form of energy weapon, including plasma defenders, laser RCWs, and recharger rifles

The Bright Brotherhood at the REPCONN test site keeps mainly to themselves. Because the Bright Brotherhood keeps its feral brethren and the ghoul bigotry they encounter, they are generally not welcomed by human settlements, who are known to attack ferals on sight.[13][14] There are some Bright followers that are found dead throughout the Mojave, but the nature of their deaths are largely unknown.

However, according to the endgame cut-scene narration (under the right circumstances), some of them are said to have returned from their Great Journey and help the town of Novac after the Second Battle of Hoover Dam in the rebuilding of the town's defenses.[15]

The Bright Brotherhood mainly appears during the quest Come Fly With Me, however the bodies of dead Bright followers may be found in certain locations throughout the wasteland. Their leader, Jason Bright, believes the Courier to be sent by "The Creator" allow them to continue with the "Great Journey." He asks the Courier to deal with the "demons" in the facility's basement and to help Chris Haversam obtain the last components needed to complete the rockets.

The Brotherhood's fate is indirectly linked to the fate of Novac at the ending of the game.

A Bright follower, member of the Bright Brotherhood