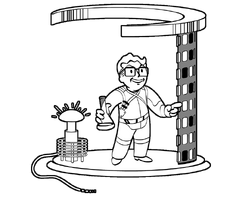 Hypothesis is an Institute radiant quest in Fallout 4.

This quest can be received from Clayton Holdren at various points throughout the Institute questline. If he doesn't give it to you on his own accord as soon as you talk to him, ask if he needs anything done.

Once active, the quest will direct you to a randomly chosen super mutant stronghold like Faneuil Hall or the Scrap Palace, where you'll be required to kill the resident super mutant leader. The exact enemy type is dependent on player level. Said leader will drop the requested flesh sample upon death.

With the sample in your possession, return to Holdren for a reward in XP. Note that in order to get any material reward from him, an easy Charisma check needs to be passed right before giving him the sample. If done successfully, Holdren will give 4 stimpaks.