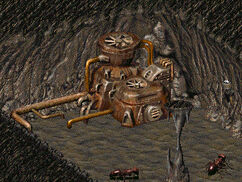 “Our air purifier's broken. It's on the bottom level. We've got no parts, and we've got no protective equipment. Without the parts, we can't fix it. Without the protection, the radon gas'll nail us. Are you any good with your hands?”— Zaius

Fix the mine's air purifier is a side quest in Fallout 2. To complete it, the Chosen One must retrieve the mine air purifier parts from New Reno, and then go into the mine itself to fix the purifier.

Talk to Zaius inside the house outside the Broken Hills mine's entrance. He will tell the Chosen One the mine needs parts for the air purifier and asks them to go to New Reno to pick them up. They can either take the reward for money, or decline and receive a combat shotgun when finishing the quest.

The mine purifier can not be fixed without the right parts so make sure the Chosen One does this quest before the who killed Richard Wright quest in New Reno if you're planning to frame Renesco.

Talk to Renesco the Rocketman in New Reno. Tell him Zaius' password. If the Chosen One doesn't, they'll need to fork over $200 for the parts ($100 with a Barter or Speech check).

Return to Zaius and he will ask the Chosen One to enter the mine to fix the purifier. The mine is filled with radon gas which will damage the Chosen One and their party for 10-15 armor-bypassing damage every couple of seconds. Wearing power armor will negate the damage. Use the parts on the clanking machine in the back (but watch out for the deathclaw!) for 1000 XP.

Return to Zaius and he will give the Chosen One a City-Killer combat shotgun or $500 if they asked for a reward earlier.

The password that Zaius gives the Chosen One during this quest is "The canary's kicked the bucket." This is a reference to a practice in which miners would bring a caged canary into a mine with them to detect poisonous gas leaks in the mine. Because a canary's body mass is much smaller than a human's, the canary would pass out or die a significant amount of time before a human would, giving the miners an early warning to escape the mine before it was too late. Hence, the "canary's kicked the bucket" because the mine was filled with radon gas.