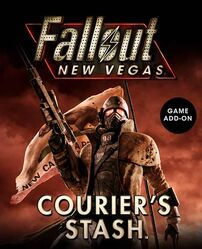 “Wake up in the Mojave Wasteland with an edge. Courier’s Stash™ gives players immediate access to four content bundles previously available only through pre-ordering Fallout: New Vegas®. The Caravan Pack, Classic Pack, Mercenary Pack and Tribal Pack each offer unique weapons, apparel and aid advantages that will help you throughout your journey.”— Official description

It is a compilation of the four item packs that were previously released as bonuses for pre-ordering the game at certain retailers. It costs $1.99 (£1.23) on PlayStation 3 and Xbox 360, but costs $0.99 (£0.58) on PC. When they existed, it could have been bought for 160 Microsoft Points. It contains multiple new weapons, armors, and a supply of aid items, such as stimpaks and doctor's bags. It is also available to those who have bought the Ultimate Edition of Fallout: New Vegas.