Protectrons are a type of robot encountered in the Commonwealth, the Island and Nuka-World in 2287.

A widespread and popular model in RobCo Industries' line of products, the Protectron was designed as an inexpensive work drone, capable of performing a wide variety of tasks such as construction, firefighting, and office duties.[1] Some models were designed for security and have defensive capabilities.[2]

A bipedal, ambulatory robot capable of instigating combat, the Protectron has a transparent faceplate with several blinking red lights within. Breaking its faceplate reduces its accuracy.[需要引证] If the Protectron is inactive and a melee weapon is used, the chance of breaking this barrier increases. [需要引证] The dome that serves as their head scans surroundings, and two arms appendages serve as both laser and melee weapons. The upper-body of a Protectron can swivel to either side, and can change direction of movement by way of two legs.

If both of the Protectron's arms are destroyed, it will initiate a self-destruct sequence. The unit will begin to glow yellow and explode shortly thereafter. Legendary Protectrons also self destruct in this way.

The personality changes the behavior of the Protectron, what it says as it patrols, and creatures it attacks:

The standard Protectron can use its arm lasers to attack foes from a distance, or swat foes away for a substantial amount of damage when up close. If their arms are destroyed, they will initiate their self-destruct sequence and waddle toward their enemies in a last-ditch attempt to take them out. Appears in green, blue and tan.

This model possesses two static electricity generators on its hands which are intended to be used as defibrillators. Protectron medics lack any ranged armament, but are deceptively powerful at melee range. They can attack targets with a staggering flurry of electrified slaps followed by a two-handed power attack. Found outside Robotics Pioneer Park, inside Suffolk County Charter School, Mass Bay Medical Center, Haymarket Mall, Medford Memorial Hospital, Milton General Hospital and Kendall Hospital.

This Protectron model is equipped with an internal "cryo-gun" which it can utilize in battle. Before the war, it was utilized to suppress fires. Attacking anything near the robot will cause it to become hostile. If the Sole Survivor is equipped with a Molotov cocktail, the Protectron fire brigadier or any Protectron set to fire brigadier personality mode will warn that the item they are holding is possibly a fire hazard and should be disposed of.[3] Found at outside the Boston Police rationing site, Robotics Pioneer Park and inside D.B. Technical High School.

A somewhat stronger and more powerful variant of the original Protectron, this type can utilize dual laser arms in combat and a better melee attack. It can also appear in several different colors.

This type can be distinguished by its yellow hazard color scheme with a light on their heads. In close range combat, it will attack its target with simple punches. If its target is outside of melee range, it will attack with one or two nail guns (similar to the railway rifle), rapidly firing spikes. It can also be spawned with two cargo loading arms that deal a large amount of melee damage. If the Sole Survivor is wearing a hard hat or mining helmet, the Protectron will note how they are wearing proper safety equipment for the location they are in.[4]

Police Protectrons are similar to the utility variants due to the fact that they have reinforced plating over their inner workings. They can be distinguished due to their blue paint job. These Protectrons utilize a stun gun or electric shock in close range combat.

Similar to the Protectron and Protectron watcher, this variant is has the highest HP of any regular Protectron. It can use both dual rapid lasers, and has powerful melee attacks.

Doom Protectrons are even tougher variant of the Protectron devil, with proportionally stronger melee attack and laser damage. As with the other variants, they are usually seen with Rust Devils or other Rust Devil Protectrons.

Protectron basilisks are very high level encounters, with heavily armored chests and legs. They wield a railway rifle in their right arm and a flamer in their short left arm. The right wrist, arm and leg plates are spiked and serrated, causing their melee attacks on targets to leave them bleeding. Their heads are tall, like a spiked crown, with the skull of a human on the lower part. They can be seen accompanying legendary Rust Devils, assaultron gorgons or Mister Handy war machines.

Protectron golems are the strongest of all Protectron variants. With an even deadlier melee attack and even better laser damage. Seen with Rust Devils and accompanying robots.

Galactrons are another variant of the Protectron added in Nuka-World in the Galactic Zone. Although marketed as "never-before-seen prototypes", Galactrons are, in reality, customized security Protectrons with a custom white and gold paint job and enhanced laser weapons.

Galactron ushers are meant to provide security during different events.

Identical in appearance to other Galactrons, this variant has the highest stats of the Galactron robot.

The Galactron technician is a Galactron in the projection booth of the Starlight Interstellar Theater. It will initially be in a charging station until the booth is entered.

This type of Protectron is used by Gunners. The Protectron chef wears a chef hat and is found in the Grandchester Mystery Mansion.

Protectrons that have been reprogrammed to be Gunner soldiers.

Unnamed Protectron sheriffs are not present in Nuka-World, but Protectrons Sheriff Eagle and Sheriff Hawk do appear in Dry Rock Gulch, manning the entrances as tour guides.

Protectrons appear in Fallout 4 and its add-ons Automatron and Nuka-World. 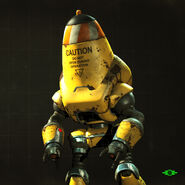 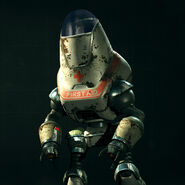 Concept art featuring the internals of a Protectron