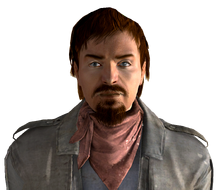 Paulson without the hat

Paulson is an abducted cowboy found frozen aboard Mothership Zeta in 2277.

Paulson is a rancher from the "Wild West" period of American history. He was abducted by aliens during one of their previous visits to Earth and has been kept in suspended animation for hundreds of years. He's quiet, soft-spoken, and appears generally unfazed by his current situation. He offers little background information about himself, but it's clear that he has a deep hatred of the aliens for removing him from his family and his life. As he puts it, all he now wants is to "seek a lamentable but satisfying revenge on every last one of those bastards."[1] As such, after being thawed from stasis, he can be observed coldly killing a surrendering alien worker.

Following the events of Mothership Zeta, Paulson leaves the ship to wander the wastes. He will not become an active non-player character in the Capital Wasteland and does not appear again without the use of console commands.

Paulson appears only in the Fallout 3 add-on Mothership Zeta.

End of the road for you!