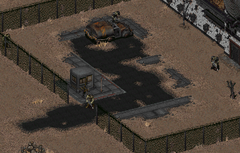 Mariposa Military Base, the largest facility in the northern wastes, and the danger the Brotherhood was fearing.

“Well I believe there's an army massing to the north and in the mountains to the east, but I don't have any way to prove it. The Elders, they won't even listen.”— John Maxson

Scout the northern wastes is an unmarked quest in Fallout, given by High Elder John Maxson of the Brotherhood of Steel.

This quest will be unavailable if one has already destroyed the military base.

Before receiving this quest, the Vault Dweller must travel to the Hub and go to the Far Go Traders building located in the far east section of downtown, once inside talk to Rutger and tell him that the player character is looking for work. He will then tell them to enter the back room and talk to Butch who will then inform them of the missing caravans, however finishing any of the Brotherhood quests is not required. The player character must also have spoken with Cabbot after being initiated. Then they can finally speak to Maxson and receive the quest.

Initial reports from scouts, as well as the location of the mutant body that Vree recovered, indicates that there's a massive source of super mutants brewing in the northern wasteland. The elders of the Brotherhood of Steel want the Vault Dweller to verify the rumors.

To complete the quest, the Vault Dweller needs to head northwest of the bunker on the world map. After a few days of travel, the military base will show up. Entering the location is considered scouting.

When the existence of the base is revealed to High Elder Maxson, he convenes with the remaining elders and the Vault Dweller may attempt to convince the elders that he requires Brotherhood assistance in storming the base or the Cathedral.