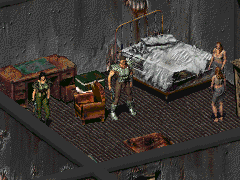 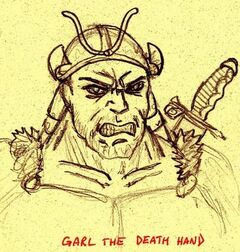 A powerful man in charge of the first generation of Khans, Garl is violent and bloodthirsty. In his own words, the raiders under him only accept the meanest and toughest characters around, who are distinctively bloodthirsty, violent and extreme.[2] One of the most notable facts about Garl's life is that he killed his own father to take control of the Khans. It seems that violence runs in the family, as Garl's father wasn't a particularly nice person and used violence on his son more than once.[3]

Garl's family originally came from Vault 15. When the shelter was opened, his father was part of the group that left and formed the Khans. Since then, the Khans regularly raid Shady Sands for supplies, operating out of a ranch house in essentially the middle of nowhere. Despite his proclivity for violence, however, Garl has managed to find a woman willing to bear his child and by 2161 has a son: Darion.[1]

Garl was killed along with most of the Khans by the Vault Dweller, breaking the raiders for decades and allowing the NCR to rise.[4]

Canonically, as established in Fallout 2, Garl is eventually killed by the Vault Dweller along with all other Khans in the Khan camp. A Khan (who doesn't appear in Fallout) named Darion continues the Khans legacy, carrying on in Fallout 2 as the New Khans.

A male Vault Dweller with a Luck above 8 has a 50% probability to be mistaken for Garl's father, the original Death-Hand and original leader of the Khans. Everyone in the camp gets freaked out by the "ghost of Death-Hand" returning since Garl killed him to gain control of the gang.

Garl appears only in Fallout and is mentioned in Fallout 2 and in the Fallout Bible.

If Ian kills Garl and not the Vault Dweller, they will receive the "bad" ending for the Khans where they continue to pillage the Northern Wastes, even if every Khan was killed.[verification overdue]