Berkeley Springs is a town in the Mire region of Appalachia in 2102.

Located in West Virginia, Berkeley Springs was originally incorporated as "Bath" and remained named as such until West Virginia was formed, when it adopted the name of its original Virginia post office, Berkeley Springs. The town is built near mineral water springs that were a frequent destination among Native Americans for hundreds of years. Following European settlement, the same springs attracted their attention, turning Berkeley Springs into the first spa resort. It retained its role all the way up to the Great War, remains a popular tourist destination. The Samuel Taylor Suit Cottage popularly referred to as Berkeley Castle, was a characteristic element of its landscape, completed in the late 19th century.[1]

Before the Great War, Berkeley Springs became a preferred spot for the affluent, who purchased apartments and mansions throughout the town. The service sector experienced a boom, providing services to the rich, but quickly learned that wealth also breeds arrogance and contempt. The entitlement of the rich denizens reached comical proportions when the local spa had to hike its prices to remain viable in the increasingly brutal economy and they started complaining that the spa was taking advantage of them - the idle rich, driving fast cars and living in mansions.[2]

After the nuclear strikes, Berkeley Springs became one of the few safe spots in Appalachia. It escaped the nuclear blasts, but that only forced it to deal with an ever-increasing stream of refugees. By October 25, it became apparent that the clinic was losing more than it could save and even supplies dropped off by an Army vertibird on the 31st couldn't change that fact. The clinic was low on everything, including medication, sterile instruments, bandages, and dressings. The backup generators burned through their cores, forcing the staff to salvage cars for fusion cores to use for the clinic and jury-rigging systems. The worst came to pass on November 6, when the clinic ran out of spare supplies and was forced to redirect patients to Charleston and Harpers Ferry. Personnel started deserting. The clinic was pronounced effectively dead on the 11th, when a gang came to the clinic, killed two soldiers left behind as protection detail, and stole the remaining supplies after gunning down a nurse for resisting. The remaining doctor, nurse, and three patients left for Charleston on the 13th, after it became clear that the clinic and by extension, the town, were no longer safe.[2]

Starting at the city limits sign on the south side of town, the Berkeley Springs station is directly east. Berkley's main road, S. Washington St., runs south to north, and the whole town is cut in half by a waterway. Heading north into Berkeley, a Red Rocket is on the righthand side with a stash box inside. Further north is a clothes store parallel to three boarded-up buildings across the road. Continuing to the intersection of S. Washington St. and Market St. is Dr. Barnaby's pharmacy; accessible through a level 2 terminal or level 3 locked door is a backroom full of chems. After the intersection sits a couple of two-story brick buildings, after them, a strip of inaccessible buildings ending with a church.

Following Market St., there are a series of five two-story houses. The third house can be entered and contains a bed, the fourth building is almost entirely destroyed. Mansions and residential buildings line the eastern side of town, containing several terminals. The Berkeley Springs city hall is opposite, beyond the canals, and includes two terminals, a steamer trunk inside and a locked safe.

Traveling west over the waterway, the player character arrives at a large, brick, three-story town hall fortified by some turrets. North of this is a park flanked to the west by two inaccessible houses. Continuing north through the park is a Beauty and Spa Salon with loot inside and roof access. Behind the saloon are two sets of three inaccessible houses separated by a road.

The rest of the town stretches alongside the main road and the adjacent canal. At the southern edge of town sits the RobCo Bot Shop and an old mining station, with a large clothing store and Red Rocket gas station just to the north. The gas station contains the player's stash, and a weapons workbench in a shack behind the station.

Outside of Dr. Barnaby's pharmacy, above a window, is a sign advertising information on the town of Bar Harbor, Maine.

Berkeley Springs appears only in Fallout 76.

The south entrance to Berkeley Springs, with Red Rocket visible

A campsite with 2 bicycles

A skeleton lying next to a scoped .44. Footprints can be seen walking away from the corpse

The front of the Amelia Espresso building 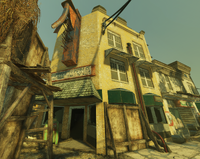 Pharmacy with a lot of chems in the locked backroom