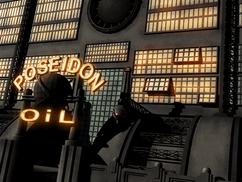 “That's the spirit. I was a-hopin' you'd say that. Great. Just use this disk here on Vault City's central computer and then git it right back here. We'll use less uranium, the core won't leak so bad, and this Vault City won't have any reason to come exterminate us.”— Festus

Optimize the powerplant is a quest in Fallout 2.

Speak with Festus, he will tell you to optimize the plant and give you the optimization disk. Afterwhich proceed to Vault City, speak with McClure and run the disk on Level 3 Vault Computer. Return to Gecko and use the disk on the computer console in the powerplant to optimize the plant. Alternatively, you could talk McClure into optimizing the disk for you and save yourself the trouble of heading down into the Vault.