“This is what it's all about - the salvation of your village right in your hand. Just add water and stir.”— Fallout 2 Official Strategies & Secrets

“The G.E.C.K. will collapse all matter within its given radius and recombine it to form a living, breathing, fertile virgin landscape and allow life to begin anew.”— Fallout 3 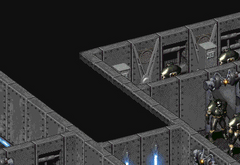 “The Garden of Eden Creation Kit. This unit is standard equipment for all Vault-Tec vaults. A GECK is the resource for rebuilding civilization after the bomb. Just add water and stir.”

The tribals of the town of Arroyo, which was founded by the Vault Dweller, passed down stories of the "Holy GECK," which they came to believe was a sacred, magical item which can change the Wasteland into fertile land again.

Though the GECK may not have been the holy cure-all the tribal inhabitants of Arroyo believed it to be, in the right hands it was a very useful piece of pre-War technology that could help establish a viable new community in the post-nuclear wastelands. Alternately it was indeed a miraculous device, capable of terraforming the Wasteland into something far more habitable. Either way, after the destruction of the Enclave Oil Rig, the dwellers of Vault 13 rescued from the Oil Rig used it to rebuild Arroyo.

The GECK was instrumental in the creation of Vault City by the former inhabitants of Vault 8 (though whether the city's success can be attributed to the GECK alone is debatable). By combining their GECK's contents with power from Vault 8's fusion generator, the residents of Vault City were able to erect their settlement's first buildings and generate arable farmland.

When the Lone Wanderer locates their father in Stanislaus Braun's Vault 112, they learn that in order to make Project Purity work properly, they require a G.E.C.K. After James' demise, the Wanderer makes their way to Vault 87, a horrendously irradiated location, where they acquire a G.E.C.K. unit.

It seems that no other vault in the Capital Wasteland was issued a G.E.C.K, hinting that very few vaults were supplied with one, possibly due to the price of each unit. There is also no indication of any Vaults in the Mojave Wasteland having a G.E.C.K., nor is there mention of a G.E.C.K. in most vaults that have been mentioned in-game or in the Fallout Bible.

This version of the G.E.C.K. is a far more advanced piece of technology than the implied agricultural starter kit the developers of the previous games intended it to be. In this case, when included as a component within Project Purity's Purifier, the G.E.C.K. helps that other technology remove all radioactive particles from the water of the River Potomac that flows through it.

In Fallout 3, it is possible for the Lone Wanderer to reach the G.E.C.K. instead of allowing Fawkes to retrieve it, thus allowing the player to activate it. If this is done, a blue energy ball expands around the G.E.C.K., killing the player's character and, after a burst of white light, the most recent save game is loaded.

While no G.E.C.K.s can be found in Fallout 76, the device was issued to at least Vault 94 in Appalachia.

Vault 94 was issued with no weapons and an abundance of resources, and its residents were drawn from a pacifistic religious community. According to terminal entries found in Harpers Ferry written by Ella Ames and Mayor Miranda Vox, an ambassador from the vault arrived in town and told the survivors of the vault’s resources, and that they were willing to share them. Mayor Vox then sent a group, consisting of Billy, Cole, Lucas and Red to the vault. They all thought that the dwellers openness and altruism was a front, and after killing the vault leaders proceeded to massacre the rest of the vault residents. The group then found the security field around the G.E.C.K. and forced their way through it, then destroyed the device with a minigun. This caused the device to explode and blanket the area with a cloud of mutagenic gas, which came to be known as the Mire for its heavily mutated foliage.

The stories of Fallout Tactics 2 and Fallout: Brotherhood of Steel 2 were to revolve around "mutant" GECK units, which had become infected with radioactive pathogens and caused mutant plant and animal life to expand and consume huge swaths of land. While the origin of the Tactics 2 GECK is unknown, the GECK in Brotherhood of Steel 2 was found by a former Cypher called Miles Reese. In both situations, the GECKs were "terraformer" type units, like the Fallout 3 GECK.

Miles Reese was conducting research into the GECKs capabilities, which led him to the Nursery where he stole a prototype GECK with the hopes of terraforming the wasteland into a new, greener, and human free "Eden." The GECK, still not quite mastered by Miles, created a patchwork of lush vegetation in the areas he travelled through. Upon reaching the Gulf of Mexico, Miles toiled with the GECK for five years, greatly magnifying its effects, not concerned with the immense effects it was capable of when combined with an FEV environment. The GECK could now terraform on a dangerous scale, including within enclosed structures, and occasionally produced carnivorous plants.

[1] It could generate unnatural weather patterns and his experiments created jungles within deserts, and the Gulf, whose water had apparently retreated a considerable distance, re-flooded on an even larger scale. As Miles continued to tinker with the GECK its capabilities became sharpened and could focus its power into more specific tasks such as protecting Miles' base, the Corpse, with an organic shell. Armed with an extremely dangerous and refined piece of technology, or New Eden device as he referred to it, Miles continued with his ultimate goal. He went on to exploit the Jackals to his own end, all the while planning to eliminate them with biological mini-bombs which detonate at his command created by the GECK that he infected them with.

[2] A second GECK was found by the player character in an Austin gas station,

[3] which they would go on to use to overload Miles' mutant GECK causing a devastating explosion.

[4] It seems a combination of continual exposure, self-augmentation experiments and control over the GECK altered Miles into a being capable of symbiotic relations with the plant life it generated, vines protruded from his person and he was capable of merging with the plants themselves.

The Fallout 3 SDK (Software Development Kit), called "The G.E.C.K.", has been released and is up for download at the official Fallout 3 website. It is also available for Fallout: New Vegas.