“Now that Marie's back, we have a chance at curing the disease that's been ravaging The Pitt since the bombs. Without it killing our kids, we can grow like a real city. No more bringing in slaves. No more forced labor. Things can get better. It's taken me a lot of work to rebuild this city. With your help, it's finally going to have a chance.”

Lord Ishmael Ashur is the leader of The Pitt in 2277. A former initiate of the Brotherhood of Steel, he single-handedly revitalized the city following its near-destruction by the Brotherhood.

Ashur was probably born somewhere on the West Coast of the United States. As he grew up, he became a loyal member of the Brotherhood of Steel, which had not reached as far east as the Pitt at the time. Like most of the Brotherhood, he vowed to recover any and all advanced technology.

In 2254 the Brotherhood's ruling council decided to send a contingent of soldiers to the East Coast, with three important objectives. First, to scour the ruins of Washington, D.C., once the nation's capital, and recover any and all advanced technology. Second, to investigate the reports of super mutant activity in the area. Third, to re-establish contact with the Midwestern Brotherhood of Steel and return them under Lost Hills command. Initiate Ashur was part of this team of soldiers, under the leadership of one Owyn Lyons, other members of the party included Rothchild, Henry Casdin and Paladin Tristan.[2]

Unable to contact the Midwestern Brotherhood, the Brotherhood pressed on eastwards towards Washington, D.C. During their travels, the Brotherhood came across the disturbingly vile ruins of Pittsburgh, Pennsylvania. Known as The Pitt, the city was lawless: rape gangs, raiders, slavers and many other kinds of horrors all freely wandered and anarchy ruled the streets. The few innocent inhabitants had to scratch out a living in this terrorizing environment, most of who were either sick or dying from the combined effects of the intense radiation and pollution from pre-War industrial factories damaged by the bombs spewing into the atmosphere.

Horrified by what they saw, the Brotherhood then led "The Scourge," a large-scale military action throughout the Pitt, combing the ruins and killing anyone who dared to put up a fight. Due to their sheer superior technological and combat abilities, the Brotherhood sustained virtually no losses but wiped out much of the Pitt's population. By the time The Scourge was over, only a handful of raider gangs still existed in the city. Although the intent of the Scourge remains unclear, the Brotherhood took many non-mutated children, such as Paladin Kodiak, from The Pitt and placed them into initiate training.

During the Scourge, Initiate Ashur was caught in an explosion in a steel mill and was presumed to be their only casualty, so the Brotherhood left him within the mill and moved forward towards Washington, D.C. Ashur laid there for hours, but was soon awoken when he was pulled out of the rubble by scavengers trying to loot his power armor. Ashur impressed them, with some of the scavengers even considering him a god. With the locals not having to worry about the rampant raider gangs which once infested the streets, he brought many of the scavengers in the area together under his leadership.

Founding of The Pitt

Instead of trying to return to the Brotherhood, Ashur founded the new city of The Pitt because he was touched by the tenacious locals who had endured great hardship before, during and after the Scourge. Another reason being the fact that it contained the only operational steel mill the Brotherhood had ever run into, allowing the Pitt to produce its own equipment. To gain control, Ashur formed his own gang and using his Brotherhood training and expertise, quickly began killing the leaders of remaining raider gangs to establish dominance. Raiders who did not rebel were incorporated into his gang and numbers swelled, his control over the Pitt grew to the point where his territory extended to most of the ruins. Ashur transformed his raider gang into a functioning government under his autocratic rule, rebranding his gang an "army" with the most fierce raiders becoming his lieutenants. With the Pitt firmly under his control, Ashur and his guards occupied a mostly intact skyscraper called Haven as his palace to watch over his city.

However, it wasn't long before he realized that raider gangs would not be enough to allow his new civilization to grow. In order to achieve this, Ashur soon started to use slaves (who he insists on calling "workers" to remind them that they all have a chance at freedom, no matter how slim) as labor and admits he hates to do this, but claims "it has to be done" since most citizens of The Pitt are unable to have children due to the Troglodyte Degeneration Contagion. Most of the non-raider population was enslaved forming a "working class," managed by a brutal "upper class" largely composed of raiders to watch over them and punish dissent. The Pitt began to slowly rebuild, the slaves made great progress in making things operational in the Pitt again; Ashur eventually started importing slaves and hiring raiders from outside the Pitt area to accommodate the growth.

The Pitt was approached by a scientist named Sandra Kundanika after hearing about its status as an up and coming civilization in the wastes. Instead of being enslaved or attacked by the raiders guarding the city's perimeter, Sandra was welcomed into the Pitt's raider class due to her talents which greatly impressed Ashur, eventually marrying her. A year before 2277, Sandra had become pregnant and gave birth to Ashur's child, a daughter named Marie. In a miraculous stroke of luck, Marie was discovered to possess a special ability that the rest of the wasteland lacked: she was immune to mutation.

This immunity meant that Marie would not be affected by the Troglodyte Degeneration Contagion, which had been massively blighting the Pitt. Ashur and Sandra quickly set to work on developing a cure for their fellow Pitt inhabitants. It is hinted that if the cure were to be successfully produced allowing natural population growth, Ashur would greatly reorganize the Pitt by abolishing slavery and granting all its citizens their freedom.

Ashur spends the majority of his time in his office at the top of Haven, but is occasionally seen giving speeches to the slaves of The Pitt every once in a while. He also runs The Pitt's radio station.

“Citizens of The Pitt, workers of Downtown, traders of Uptown, and all fierce souls who do what must be done! I bring you good news! We stand at the dawn of a new golden age. Where others merely survive, we thrive! Our industry is the envy of the Commonwealth! Our safety is the envy of the Capital Wastes! Our might is the envy of Ronto! And while I have led your efforts, it has been by your own strength that you have earned all of the envy of the world. They envy the steel shaped by the workers in our mills, and they envy the strength of our traders and raiders who wield that steel for The Pitt. And most of all, they envy our victories in the struggle for freedom. Because, yes, freedom is what we all work towards. Freedom from fear, freedom from disease, freedom to live as once we did before we were shackled by atomic fire! And so, to celebrate this struggle, I ask my loyal workers: who among you is prepared to fight for your freedom? Who among you will risk your life in the crucible to create a new life of freedom in Uptown? Who will take this rare chance to thrive?”

Ashur appears only in the Fallout 3 add-on The Pitt.

Ashur in his office 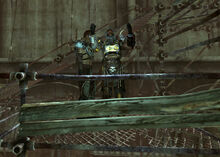 Ashur giving a speech in the Downtown 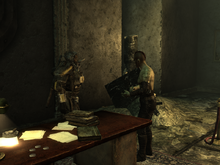 Ashur and Krenshaw in the Haven