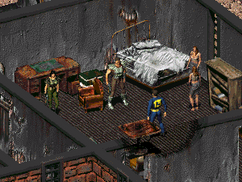 “You are barely tolerated by us. Why should we give one of our most prized possessions to you?”— Garl Death-Hand to the Vault Dweller

Rescue Tandi from the Raiders is a side quest in Fallout.

After completing the Stop the Radscorpions quest and returning to Shady Sands two days in the travel map later, either Seth or Aradesh will ask the Vault Dweller to save Tandi from nearby raiders, known as the Khans.

There are numerous ways to rescue Tandi:

The first and second methods of rescue entail a lot of risks, with the second method especially so should the Vault Dweller still be at a low level, as Garl is a highly competent brawler and is much more experienced than his men.

Tandi can be used as a party member if the Vault Dweller never takes her back to Shady Sands. However, since she cannot be given combat commands and does not appear to change her equipment she is of limited use. She also does not have comments for any area or event beyond just taking her home, whereas the other party members will comment on various areas, buildings and people throughout the game. 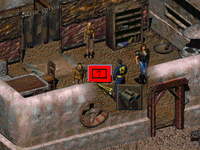