The People's Liberation Army was the unified military force of the People's Republic of China, comprised of both the ground units of the Chinese army and naval forces of the Chinese navy.[2] It was involved in numerous battles during the Resource Wars and ultimately retaliated with nuclear force during the last days of the Great War.

Answering to Chairman Cheng, the People's Liberation Army and its naval components played a crucial role in maintaining the nation's influence worldwide. They played a pivotal role in the Resource Wars, responsible for fighting the United States and its armed forces during the Sino-American War, from the initial invasion and occupation of Alaska in 2066 to a defensive war in mainland China in the wake of the 2074 American invasion.

When it became apparent that the United States would not stop until China was completely destroyed, China launched its nuclear weapons. At 09:13 EST, the Integrated Operational Nuclear Detection System detected the first four missile launches and the United States went to DEFCON 2. Four minutes later, NORAD confirmation sealed the fate of the world. At 09:26 EST, the president ordered a retaliatory strike according to scenario MX-CN91.[3] As American weapons were launched, the first Chinese nukes hit in Pennsylvania and New York at 09:42 EST. By 09:47 EST, most American facilities went offline.[4]

The attack was erratic, but devastating: Washington, D.C. was hit after the West Coast was destroyed, including strategic targets like the West-Tek Research Facility. Some secondary targets, like Las Vegas and the adjacent Nellis AFB, escaped destruction thanks to missile defenses (which shot down or disabled 68 of the 77 warheads aimed at the city). Others were not so lucky: Salt Lake City was hit by thirteen warheads and reduced to an unrecognizable wasteland.[5]

“200 years ago, I launched all of Yangtze's high-yield nuclear missiles. As ordered. For 200 years, I have lived with that guilt. That shame. So much fire. Such bei.”— Captain Zao of the Yangtze-31, Fallout 4

Liberator robots could still be found in working condition, spreading propaganda posters after the Great War in Appalachia. According to Dick Richardson of the Enclave, the Chinese might have been the ones to use a nuclear attack first, saying, "...and then those damn reds launched...". It is believed they launched thousands of bombers and ICBMs that swept across the United States from west coast to east, as according to Carol when questioned about the Great War in Underworld, "...we had some warning after the west coast dropped off the map..." While the People's Liberation Army mostly targeted major strategic objectives, such as West-Tek facilities and Washington, D.C.. Despite this, nuclear-powered subs off America's East Coast received orders to fire their full payload of SLBM's, with subs complying such as the Yangtze-31 commanded by Captain Zao. After the Great War, the remaining Chinese remnants in the United States slowly withered out and died, becoming feral ghouls or barely eking out an existence in the post-apocalyptic wasteland as non-ferals. Nonetheless, Chinese infiltrators remained in the District of Columbia, taking shelter in Mama Dolce's processing factory. The Shi also survived on America's West Coast, and built a society around the salvaged remains of their submarine, referring to its central computer as "the Emperor."

Ghoulified Chinese remnants over 200 years following the Great War still inhabited Mama Dolce's food factory building in D.C. where the covert People's Republic of America operation and the radio broadcasts were still in effect, albeit with no further purpose. The American city of Pittsburgh also featured numerous smuggled Chinese weapons, with most of the Chinese infiltrators being killed just after the Great War.

The army was responsible for land operations, ranging from conventional warfare on all fronts of the war to subterfuge and infiltration in mainland America. The People's Liberation Army relied on its vast reserves of manpower and industrial capacity to maintain its edge,[需要引证] though unlike the United States, the focus was put on firepower rather than personal protection.[6] Chinese soldiers were issued jumpsuits rather than hard combat armor, though the Type 93 assault rifles that were the workhorse of the army were significantly more powerful than substitute standard American R91s, as well as the "Red Victory" grenade rifle, which were faster to reload but did less damage than American Great Bear grenade rifles, even being used by American army forces for that very reason.[7] The key to the Chinese doctrine were tanks, used to support infantry operations during the invasion of Alaska. However, when they were countered by early power armor Americans deployed, China realized that it had no analog and rushed to create its own versions.[Non-game 1]

The Chinese had an extremely effective intelligence and security apparatus. Apart from concealing its stealth research, Chinese operatives infiltrated mainland United States and set up an extensive covert network of spies and intelligence operatives. China even managed to set up regular patrols by Chinese submarines, such as the SSN-37-1A. In an Operation: Anchorage cut note, there is mention of Chinese saboteurs attempting to sabotage the Hoover Dam in Nevada.[8] Fallout: New Vegas confirms this with a terminal entry and the presence of Chinese stealth armor.[9]

The largest of their spy networks were located in and around Washington, D.C. Soldiers, operators, and spies from the elite 127th Iron Division operated out of a fake food processing factory in Arlington called Mama Dolce's.[10] Further safehouses and field operations established at various locations, including a listening post in the Taft Tunnel, the bunker at broadcast tower KT8 and an abandoned safehouse in the Pitt's abandoned apartments. Chinese spies also had a strong presence in Point Lookout, especially in the abandoned Chinese intelligence bunker,[11] and around strategic locations like the Mount Desert Island Naval Base.[12] The PLA had also commandeered American robots, such as Protectrons, utilizing them as clearance points for undercover agents.[13]

The army also maintained a covert intelligence facility in Appalachia. Fujiniya Intelligence Base was originally tasked with identifying and destroying alleged factory cities located in Appalachia, but after these rumors proved untrue, it shifted to intelligence gathering on the Appalachian Automated Launch System, stealth tech research, and refining the infamous Liberator robots. At the same time, a detachment of infiltrators was operating covertly beneath The Whitespring Resort. Their mission was the acquisition and operation of a Motherlode drill[14], presumably to tunnel into the Whitespring Congressional Bunker, in an attempt to capture it and its secrets. However, the Great War brought a halt to the mission. As of 2103, they are still trying, though they have been unsuccessful in actually breaking through [15]

The PLA Navy played a crucial role in maintaining the Chinese ability to wage war, prowling the Atlantic and the Pacific in search of American shipping, warships and allowing Chinese infiltrators to land on American shores undetected.[16] Infiltration submarines like SSN-37-1A patrolled coastal waters and monitored enemy activity, while nuclear ballistic missile submarines ensure first and second-strike capability, even in the face of impending defeat. The Yangtze-class submarines carried Submarine Launched Ballistic Missiles and were capable of launching nuclear strikes at American cities and military bases with impunity. At least one, the Yangtze-31, fulfilled its mission and delivered a strategic nuclear strike to Boston, though it suffered a collision with a mine and remained stuck in Boston Harbor for the next two centuries. Another submarine, the Shi-Huang-Ti, washed ashore in San Francisco and gave rise to the Shi.

Though there is little information about it, the PLA did have a functional air force. During the events of Operation: Anchorage, Chinese bombers can be seen flying overhead, as well as depicted on propaganda posters.[17] The Boomers also mention shooting down Xian-85 fighters in their simulations.[18]

The Chinese military enjoyed significant reserves of manpower and focused on technologies that capitalized on it. Although the individual Chinese soldier was less protected than his American foe, they had access to high powered weapons and acted as part of a large unit capable of withering the enemy through superior firepower and tactical flexibility afforded by their large numbers. Political training and ruthless officers resulted in a powerful, disciplined force that was a match for American units until the introduction of power armor.[19]

Due to little success in creating a power armor of comparable performance,[Non-game 2] Chinese researchers focused their efforts elsewhere and managed to create practical active camouflage technology, commonly referred to as stealth technology. Due to an intelligence apparatus that outclassed its U.S. counterparts, China managed to conceal its large scale research operations from American operatives for years. The development of Hei Gui stealth suits allowed for easy penetration of enemy lines and hamstringing American offensive operations where possible. While some units were captured and reverse-engineered, China's efforts continued apace and by 2075 was rumored to possess an entire fleet of stealth submarines, developed in the Shaanxi Province, nicknamed the "Ghost Fleet."[20] As such, stealth suit equipped Crimson Dragoon units stabilized the frontline, while the stealth submarines ensured that China would retain nuclear capability even in the case of a total frontline collapse.[21][22][23] Other methods used included the deployment of pulse fields, capable of literally frying power armor operators alive in their suits.[24]

China has also implemented its own biochemical research programs, including bioweapons and human enhancement programs, which inspired American scientists and prompted the establishment of the Pan-Immunity Virion Project (PVP).[Non-game 3]

A fictionalized version of the People's Liberation Army, renamed to the Red Vipers, are the antagonists of the American Armor Ace and the Power Patrol television cartoon, led by the Subjugator, the "Secretary of Oppression."

The People's Liberation Army is mentioned directly or referred to in some way in all Fallout games, but only appear in Fallout 3 and its add-on Operation: Anchorage, Fallout 4, and Fallout 76 and its update Wastelanders . 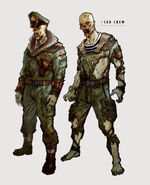 Yangtze shoulder sleeve insignia, found in The Art of Fallout 4 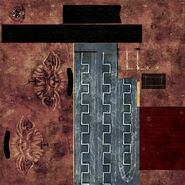 Insignia on the top left corner of the texture file