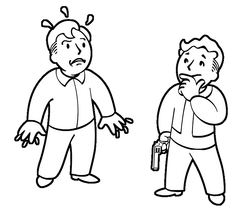 “A caravan came a few days back. Worked for Old Man Stockton. You saw them, right?”— Honest Dan to a Covenant resident

The Sole Survivor might hear about Covenant from settlers or a passing trader, which will put its marker on the map and a quest entry to "Investigate Covenant." Upon approaching the gate, the Sole Survivor is greeted by Swanson. He explains that to enter Covenant, visitors have to pass a test to filter out "undesirables." By pressuring for information and successfully passing increasingly difficult speech checks, details about synths and The Institute can be learned. Swanson will be adamant about administering the SAFE test to make sure the Sole Survivor is not a synth. After taking a seat at the table and answering all the questions, the gate to the settlement will open up.

Exit Covenant and head northeast along the road, then go east at the junction to find the bodies of Fred O'Connell, his guards, and the remains of the missing caravan. Recover Deezer's lemonade (if the quest has not begun, the cooler box will not be accessible yet). With a Perception of 6 or higher, a blood trail on the road close to the scene can be investigated to reveal that "the blood trail leads roughly in the direction of Covenant." Questioning the inhabitants of Covenant yields little info as they are adamant about having nothing to do with it. They are also oddly nice, almost saccharine.

Once learning about the existence of the compound, the Sole Survivor can either talk to Dan or go alone. When they try to exit Covenant, Jacob Orden will be at the gate and will try to convince the Sole Survivor to drop the case, even going as far as offering a bribe. If they succeed at a speech check seeking "compromise", Jacob will send word ahead to the compound, and the player character will be able to attempt to negotiate with Manny more easily once inside the compound.

To find the compound, head to the fishing spot east and below of Mystic Pines - an inlet with three outflow pipes, directly west of Covenant on the exact opposite side of the lake - and enter the middle outflow pipe (expect some rad exposure when entering and leaving). If the Sole Survivor told Honest Dan about the compound, he will be waiting inside and will follow. Continue along the pipe to face Manny, armed guards and a turret. Successfully passing a speech check with Manny will allow the Sole Survivor to be escorted deep inside the complex to meet Dr. Chambers. This check is easier if Orden sent word ahead about a compromise. Honest Dan has unique dialog if he is also being escorted. Otherwise, fighting through the complex becomes necessary. On the way there, clues about people being held captive and ongoing experiments/torture can be found, whether fighting or being escorted.

Once in the presence of the doctor, she explains her motivations, and her intentions of trying to reveal hidden synths who infiltrated the populace by creating and perfecting the SAFE test, a sort of psychological test involving studying reactions of the subject to several situational questions. Improving the test involves establishing a "baseline" and then requires various forms of psychological and physical torture to incite reactions from the subject. She may also explain that the reason for refusing to release Amelia is, that they believe she is a synth infiltrator. She will offer to pay the same caps reward offered by Honest Dan, to be allowed to dispose of Dan. Accepting her offer will result in obtaining Covenant as a settlement.

An alternative path to reach this quest stage is to bypass both Dan and Covenant entirely, and simply proceed into the compound. Then one has to either pass the hard speech check with Manny or fight off all residents except for Dr. Chambers, which will stay friendly. Talking with her will then start the quest. Another option is to ignore the doctor altogether and moving up to Amelia's prison cell to speak with her, which will also start the quest.

Another way to start the quest is to peacefully gain entrance to Covenant, then gaining access to Jacob's terminal unseen (e.g. without the inhabitants becoming hostile), which will trigger his dialogue with him upon attempting to leave the settlement. One can then move to and enter the compound through the sewage pipe, initiating the quest.

At the point of reaching Dr. Chambers and Amelia, the Sole Survivor has several choices: