Destroy the Super Mutants at the Watershed

The Hall of the Dead is a location in Necropolis. It is where Set, the ruler of Necropolis, resides.

The building appears to be a pre-War church. However, during the rule of Set in Necropolis, it has become his headquarters, as well as the home for his ghoulish followers and bodyguards. The whole place was a big, stinky rubbish heap where many ghouls lived. There are also some cages for the imprisoned glowing ones.

Hall of the Dead appears only in the original Fallout. 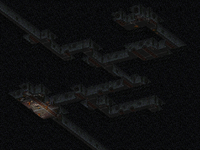