亞當斯空軍基地是屬於英克雷的一個防衛森嚴的據點。它位於首都廢土之外，需要通過白宮底下的總統地鐵通道才能到達。該基地是東海岸英克雷軍最大的飛鳥直升機基地。After the Battle of Adams Air Force Base, the Brotherhood of Steel occupies the base. 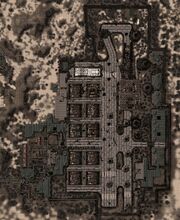