A hangar in which deathclaws are caged

需要通過白宮底下的總統地鐵通道才能到達, which can only be done after starting the quest Who Dares Wins. The train is also used to visit the base after the completion of the quest, as it is a separate area outside of the Capital Wasteland, and fast travel to the location is not possible. After the Battle of Adams Air Force Base, the Brotherhood of Steel occupies the base.

Adams Air Force Base appears only in the Fallout 3 add-on Broken Steel. It is mentioned in Fallout: New Vegas[1] and indirectly in its add-on Lonesome Road as the place where ED-E was created and sent from. It is also mentioned in Fallout 4 by Paladin Danse and Lancer Captain Kells. 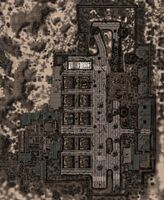 Map of the Adams Air Force Base