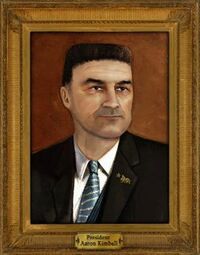 “Today, you are the waves of the Pacific, pushing ever eastward. You are the sequoias rising from the Sierra Nevadas, defiant and enduring.”

“Aaron Kimball is a former war hero and the current president of the New California Republic. His insistence on defending Hoover Dam has kept NCR troops in Nevada for years.”— Fallout: New Vegas loading screen

A defaced portrait of Kimball found in the NCRCF and Bison Steve Hotel.