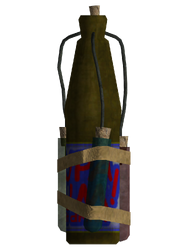 Hydra is a consumable item in Fallout: New Vegas.

Hydra is a drug developed from antivenom. Due to the Legion's disapproval of using modern medicine, some Legionaries attempted to develop a different means to help them heal damaged limbs. To do that, they combined cave fungus, nightstalker blood and the poison from a radscorpion poison gland with antivenom before use. This resulted in the development of Hydra, a curative agent that both anesthetizes and restores crippled limbs over time.

Despite its origins in the Legion, this drug has since seen extensive use throughout the entire Mojave Wasteland, including NCR field hospitals. Excessive use causes dilated eyes, an increased heart rate and blood pressure, excessive sweating and other typical symptoms of drug abuse.[1][2]

The scent of Hydra is so potent, it can be smelled in areas like Camp Forlorn Hope.[3]

Hydra appears as a Supa Yum-brand fruit drink soda bottle with three sealed glass vials of liquid taped around its middle, each one with a thin rubber tube feeding its contents up to the mouth of the bottle.

Like a doctor's bag, Hydra is used to restore health to crippled limbs, making it especially useful in Hardcore mode where stimpaks or sleeping in a rented bed won't heal these injuries. It has the advantage over doctor's bags in that it is weightless and it will continue to slowly heal the crippled wounds over 60 seconds. In a tough fight, where the Courier could receive several successive crippled limbs, a single dose of Hydra can heal them as they are received. Hydra also benefits from the Chemist and Day Tripper perks.

The downside is that Hydra carries a 10% risk of developing an addiction. If this happens, the player character will suffer from -3 Endurance unless more Hydra is used, Fixer is used, or a doctor is seen.

This chem is named after the Hydra in Greek mythology, which regrew two heads in place of every head which was severed.