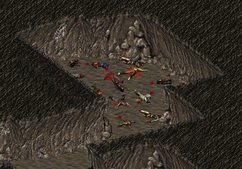 “Oh my God! I... I can't believe that... It's not... [Sighs deeply]. I suppose it may be true. She seemed to hate every mutant and ghoul she came into contact with.”— Dan

Find the missing people for Marcus is a side quest in Fallout 2.

To start this quest, talk to Marcus, the mutant town sheriff of Broken Hills. Ask him about things in town and offer help in finding the missing people. One can refuse to take $ as a reward.

Optional: Next, locate a man named Dan in a house in the northeast corner of the Broken Hills residential area. He will report that his wife is missing and one can assure him that they will be able to find her.

Once arriving on this side of town, find one of the manholes (there's one in an outhouse) and climb down into the tunnels.

Once underground, one will have to face a few giant ants. Eventually, one will come across multiple dead bodies in the northeast section of this tunnel system. Find the body of a woman (more precisely, Dan's wife). There will be a note on her body.

The note implies that the mutant Francis is the killer of these missing people. The note also implicates Zaius.

Optional: Go back to Dan, and tell him his missing wife has been found dead in the tunnels below. He can be convinced to leave town, as he might as well be the next target of the killer.

Optional: While in this part of town, have a chat with Zaius in the mine foreman's hut. He will prompt one to talk to Francis.

Optional: Confront Francis with the note found below. One can either kill him (turning Broken Hills hostile in the process) or persuade him to leave the town, to atone for his sins.

After solving this mystery, go to Marcus to claim the reward. If one refused to take money earlier, he will give them a scoped hunting rifle.