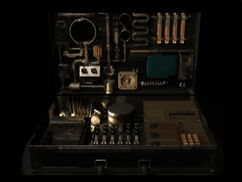 “Them things come in kits now, huh? Man, the good book don't mention that, does it?”— John Cassidy

Retrieve the GECK for Arroyo is a quest in Fallout 2. It is a main quest, given to the Chosen One at the start of the game.

There are two GECKs in the game, one in Vault 13 and one at the Enclave Oil Rig.

There are three ways to retrieve the G.E.C.K. from Vault 13:

Or, much simpler, just get to the Enclave Oil Rig. It can be found in the floor trap room, in the "safe room" all the way to the right. You'll miss a lot of XP by picking this route, but the massacre of deathclaws never happens (or rather, you never learn of them or how they are doing).

GECK in the locker; water chip in one of the footlockers of Vault 13's command center

GECK in a locker in the Enclave Oil Rig's access corridor