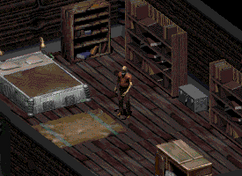 “This man, Louis Salvatore… he has killed many of my men… many PROUD men of the Mordino family. He... butchered them in the street like... dogs.”— Senor Mordino

Assassinate Boss Salvatore for Big Jesus Mordino is a side quest in Fallout 2.

Salvatore can be murdered in three different ways. The Chosen One can use a super stimpak on him, resulting in a heart attack. The other way is by stealing the oxygen tank that Salvatore's breathing is reliant on, and optionally replace it with the poison tank found in the Desperado basement. Thirdly, they can simply attack him, having to deal with his bodyguards and employees. If taking the third option, take care as Mason and all of Salvatore's men are armed with Wattz 1000 laser pistols, and the bartender has a shotgun.

Using the poison tank is the only "silent" kill option (apparently, the poison tank's appearance has them fooled, and they cannot pin the boss' death on you). All others make Salvatore's men hostile upon his death.

Stopping to watch Salvatore die before leaving will result in -5 to New Reno reputation.

After cleaning out Salvatore's bar, head back to Big Jesus and accept the reward, some chips for the trouble unless the player character has a Charisma of at least 6, in which case Big Jesus will offer a loaded SMG and a suit of MKII leather armor. Remember to thank him, and he'll also make them a made man of the Mordinos. If the player character does not thank him, they can still get in with Charisma of 9.

Note that this quest is not available if the player character killed Boss Salvatore prior to finishing Big Jesus' other quests.

If the player character completes this task, they can become a made man, which prevents them from completing other families' tasks. If they want to end this last task without becoming their made man, talk to Big Jesus while sneaking. This will not trigger combat but will check the task as done. Alternatively, accept and return later to kill Big Jesus (and his men) when ready.

After politely accepting the Charisma reward or with Charisma 9:

While the idea is to steal Salvatore's oxygen tank and replace it with Poison tank, the script erroneously checks the player character's inventory instead of the mob boss' for the Poison Tank after snatching the normal one from him to trigger the assassination sequence. To summarize, you have to steal the Oxygen Tank while also having the Poison Tank in your inventory.[已验证]