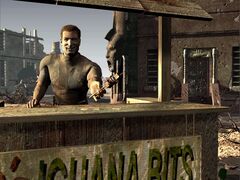 Play sound
A Trader's Life.ogg
“The Hub was a larger city than both Junktown and Shady Sands combined. You could drop the Vault in there, and you probably would not notice. But the people of the Hub had no life, and it was a desolate place just the same.”— Vault Dweller's memoirs

The Hub is a major trading city located in southern California.

The Hub is an enormous trading center and settlement established in an old town relatively untouched by the Great War. Caravans are organized here, carrying goods north to Shady Sands, Junktown, the Mojave Wasteland, and south to the Boneyard. It houses a large community of traders, barterers, gamblers, and other interesting individuals. The wide variety of people passing through ensures that there is always something interesting going on. The caravan houses that work the routes trade in everything: chems, tires, guns, bullets, food, brahmin, dirt, even scraps of metal.

It is also one of the core states of the New California Republic, with its representatives (or "governors") having a major say in the affairs of the fledgling republic.

The Hub was founded in 2093 by a man named Angus, who set up camp around a filthy oasis in the desert and an old town, relatively untouched by the Great War,[1] and proceeded to begin trading with other settlements.

In 2096, a man called Harold rose to the level of a caravan boss in the Hub. His caravans suffered occasional attacks in the wastes, but Harold's caravan outfit survived and prospered... until the mutant attacks began to pick up a few years later. Increasing mutant attacks on his caravans so infuriated Harold that, in 2102, he financed an adventuring party to find out where the mutants were coming from. Consulting with a scientist and doctor at the Hub, a man by the name of Richard Grey, the two of them decided to join forces. They, along with two others, sought out the source of mutants that had been attacking civilians in the area. Their travels led them to the Mariposa Military Base, where, after stiff resistance from robots, everyone was separated, and both Richard Grey and Harold were exposed to the FEV vats. A few months later, Harold was found by traders and taken back to the Hub. But he wasn't human anymore - he was transforming into a strange ghoul-like mutant. His former caravan partners and employees, horrified by his condition, abandoned him without even two bottle caps to rub together. However, he soon became the leader of the Hub's small ghoul population.

In 2120, Angus established himself as the governor of the growing Hub. Five years later he managed to stop the Vipers' attempt to raid the city. Sadly, He was murdered in the winter of the same year by an unknown assailant, throwing the Hub into chaos.[2]

In 2126, the Great Merchant Wars started when a band of merchants seized the water tower in the Hub. They demanded anyone wanting water must pay a toll. The war lasted for two years. The water merchants sealed up the town, but were outnumbered. A man named Roy Greene (Justin Greene's grandfather) made the peace and negotiated a settlement. The Hub's central council was formed, composed of two representatives from each of the Hub caravan companies. A long period of indecisiveness and meetings maintain the status quo in the Hub.

In 2131, the Master began ordering his super mutants to gather human stock from caravans. For many years, the caravan disappearances were blamed on monsters in the desert, and even when the abductions begin to occur on Hub caravans, the blame lay on wild deathclaws. The Hub Underground was formed by a man called Decker in 2140, who quickly started pulling the strings in the town.

The Hub can be found one square east and thirteen squares south of Vault 13.

The busiest section of the Hub, Hub Downtown is second only to the entrance in terms of foot traffic, the entrance only busier due to caravans. Downtown is host to most of the city services, including the Hub police station and library, as well as a number of commercial interests: both the Far Go Traders and Crimson Caravan hold offices in downtown, as does the Friendly Lending Company, as well as a few arms merchants. One colorful character in downtown is Iguana Bob Frazier, proprietor of a lucrative iguana-on-a-stick stand. The Maltese Falcon, the local bar and flop house, rounds out the area. The occasional homeless or drifter, such as Irwin, can also often be found here.

The enigmatic section of town, Old Town is a combination residential and commercial district. Several important characters, including Harold and Loxley can be found in Old Town, along with a handful of arms merchants and miscellaneous Hub residents. Despite its unassuming appearance, however, a great deal of danger can be found in Old Town by the adventurous or unwary, and several miscellaneous quests have their roots here.

The Heights is the upper-class residential area of the Hub, and is home to Daren Hightower, a local and very wealthy merchant. That Hightower keeps considerable valuables in his mansion is an open secret, any merchant as rich as Hightower certainly has items of value worth taking. Hightower, however, has not made his money through foolish risk-taking, so the Heights are often patrolled by paid mercenary guards. Any visitors without a good reason - or at least a good story - for being in the area are promptly ushered out, usually at gunpoint.

This location is only accessible during the quest "Help Irwin". It's a small farm, next to the Hub, owned by Irwin, which is now under the control of a band composed of seven raiders.

This location is only accessible during the quest "Find the missing caravans". The deathclaw's lair is a cave near the Hub, and the home of one of the fearsome deathclaws and a dying super mutant.

As of the arrival of the Vault Dweller, the Underground is known to have been destroyed by him (with the help of the Hub police or not), since the Hub is still here in 2241.

The Hub appears only in Fallout. However, while not appearing in-game, it is mentioned by several characters in Fallout: New Vegas, in one of Joseph B. Steyn's terminal entries and scratched into the playing area of the Caravan game. A note written by the late James Rubinek (a trader from the Hub) can also be found in the waste disposal cave on the Fallout: New Vegas add-on Lonesome Road explaining his purpose there and his last wishes, among which were the delivery of the note to his ex-wife Anna. More is mentioned in Fallout Bible. It is also mentioned in Kellogg's memories in Fallout 4.

Although the Fallout Official Survival Guide says the Hub was founded on the ruins of Barstow, its location corresponds more closely with the present-day Edwards Air Force Base, whereas Necropolis lies where Barstow would be. 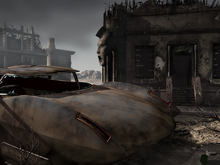 Ruined of the town in the bad endings