Chinese officer swords are traditional Jian double-edged straight swords.[1] These swords were dress swords issued to People's Liberation Army officers during the Sino-American War.[1] Many were captured and came to the American Homefront as souvenirs, some even finding their way into the hands of fifth columnists. Since the Great War, these weapons have become an uncommonly used armament by wastelanders and raiders alike. 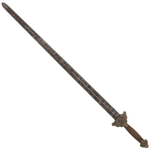