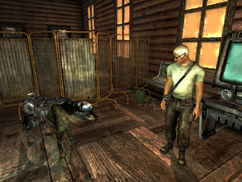 “No, Rex's condition is way beyond anything we can handle. He requires brain surgery, and some sophisticated cybernetics work, too.”— Julie Farkas

Nothin' But a Hound Dog is a companion quest in Fallout: New Vegas.

Talk to The King in the King's School of Impersonation in Freeside. Ask him about Rex, and he will explain that something is seriously wrong with him. He will then request for the Courier to visit Julie Farkas, located within the Old Mormon Fort. She will reveal that there is a man (Dr. Henry, in Jacobstown) who can help. The King can then be told that Rex can be fixed, in which he will allow Rex to be taken to Dr. Henry, who will tell you to find at least one healthy dog brain to fix Rex. There are three possible brains to choose from:

The name of the quest is a reference to the song Hound Dog recorded by Big Mama Thornton in 1952. It was covered by Elvis Presley in 1956.

That will fix the issue.
This can also be used in comparison with the resetquest trick above. If you do a resetquest 001176B8, you'll then have to pick up the quest from The King and do setstage 001176B8 30. Follow the quest through as normal then, and once the quest is over, do the command above.
If you're having any other problems, try this command: set "0010d8df".ReceivedTransplant to 1