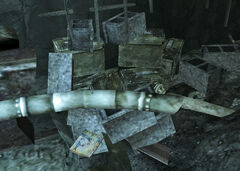 Tumblers Today and the hidden stash

The Sewer is an underground link between Pennsylvania Avenue and Seward Square. It part of the Metro system under the Capital Wasteland, but the end points have fallen in and it can only be accessed from sewer grates.

Neither entrance is very obvious. The easiest one to describe is very close to the Metro Central map marker. From there, head north around the other side of the station to the diner. Hopefully, you have already cleared it out. Go west through the opening in the ornate wall and veer northwest around the corner. As soon as you get past the rubble and reach the paved street, look to the right (north) for a grate on the sidewalk next to the rubble. This is the eastern entrance.