The Shamrock Taphouse is a location in the Commonwealth in 2287. It is inhabited by a group of raiders lead by Gaff.

The bar has a rich history as one of the oldest buildings in Boston, established in 1787. Famous American Revolutionary War Patriot Paul Revere was said to have drank here.[1] The taphouse offered authentic Irish food and daily drink specials, featuring domestic and European beer, whiskey and liquor.[2]

Enclosed by some scrap metal fortifications, this location is a hot spot for Raiders. There are at least five leveled raiders and two machine gun turrets to contend with. On arrival, it is possible to get caught in a crossfire between the raiders and some Gunners who also operate fairly close by. There may be a stray super mutant or two near the area as well.

At the back of the taphouse (from the cellar exit,) are ramps crossing a chain link fence and a few paces to the southeast are the docks where Donny Kowalski can be spoken with to initiate the quest Here There Be Monsters.

The taphouse opens to a foyer and to the left, further opens to the main bar. Immediately to the left is a cooking station in the corner. To the right is the counter and a shortcut of sorts to the upstairs area. Behind the fallen floor leading upstairs is an (Advanced) locked safe and a doorway leading into a commissary and storage area. Move on through the main bar to find a hallway and staircase at the back.

The hallway has an (Advanced) locked door on the left that is trapped with a makeshift bomb. Behind the door is a bathroom containing a chemistry station and a stash of chems and alcohol. Back in the hallway, another bathroom on the right has a busted wall, leading back to the aforementioned commissary. A (Novice) locked door at the end of the hallway also leads to the commissary via a private room.

The private room has stairwells in the back on the left and right. The right stairs lead back to the second floor, and the left stairs down into the basement area which contains a few mole rats, an armor workbench, and the pod for Buddy, a specialized brewing protectron. A stairwell near the terminal leads up from the cellar back to the streets of Boston.

The upstairs area consists of a pool hall and small office. The office contains a green steamer trunk full of leveled loot, as well as a wall of file cabinets and various miscellaneous items.

Altogether, there are roughly five leveled raiders and four leveled mole rats to deal with inside the taphouse.

The Shamrock Taphouse only appears in Fallout 4. 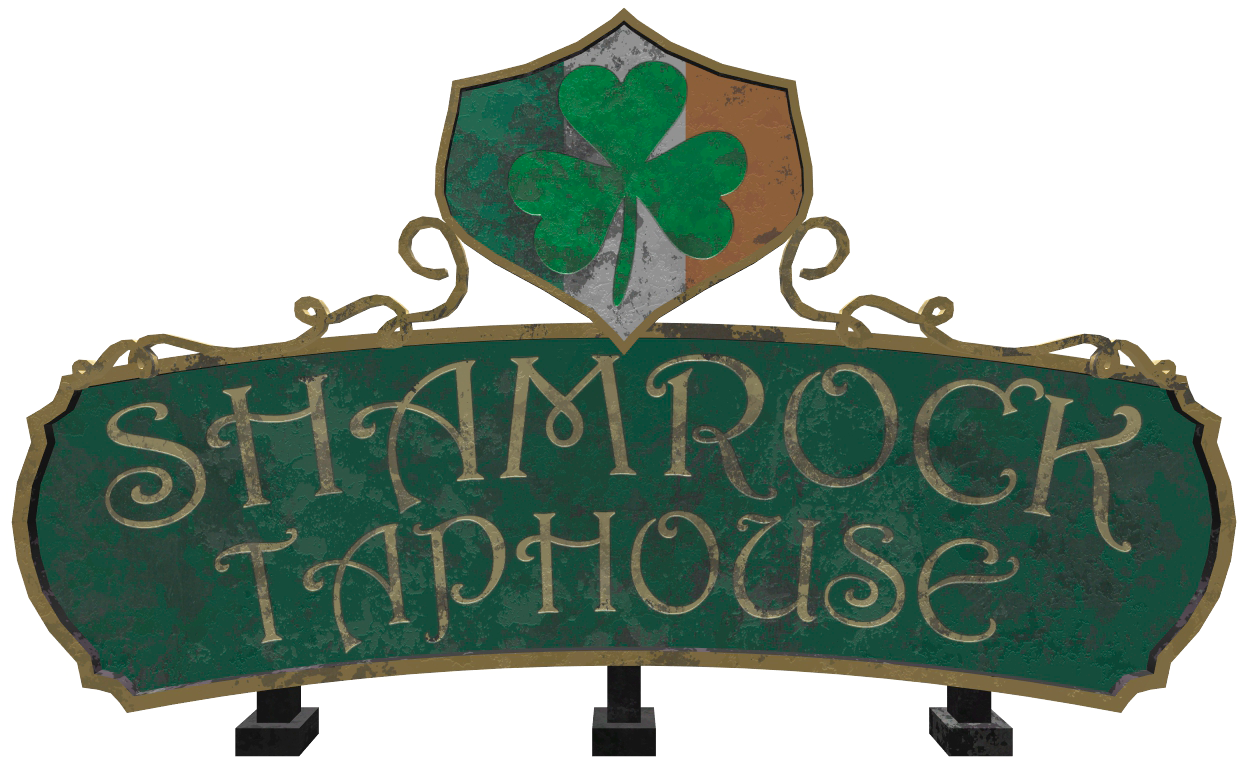 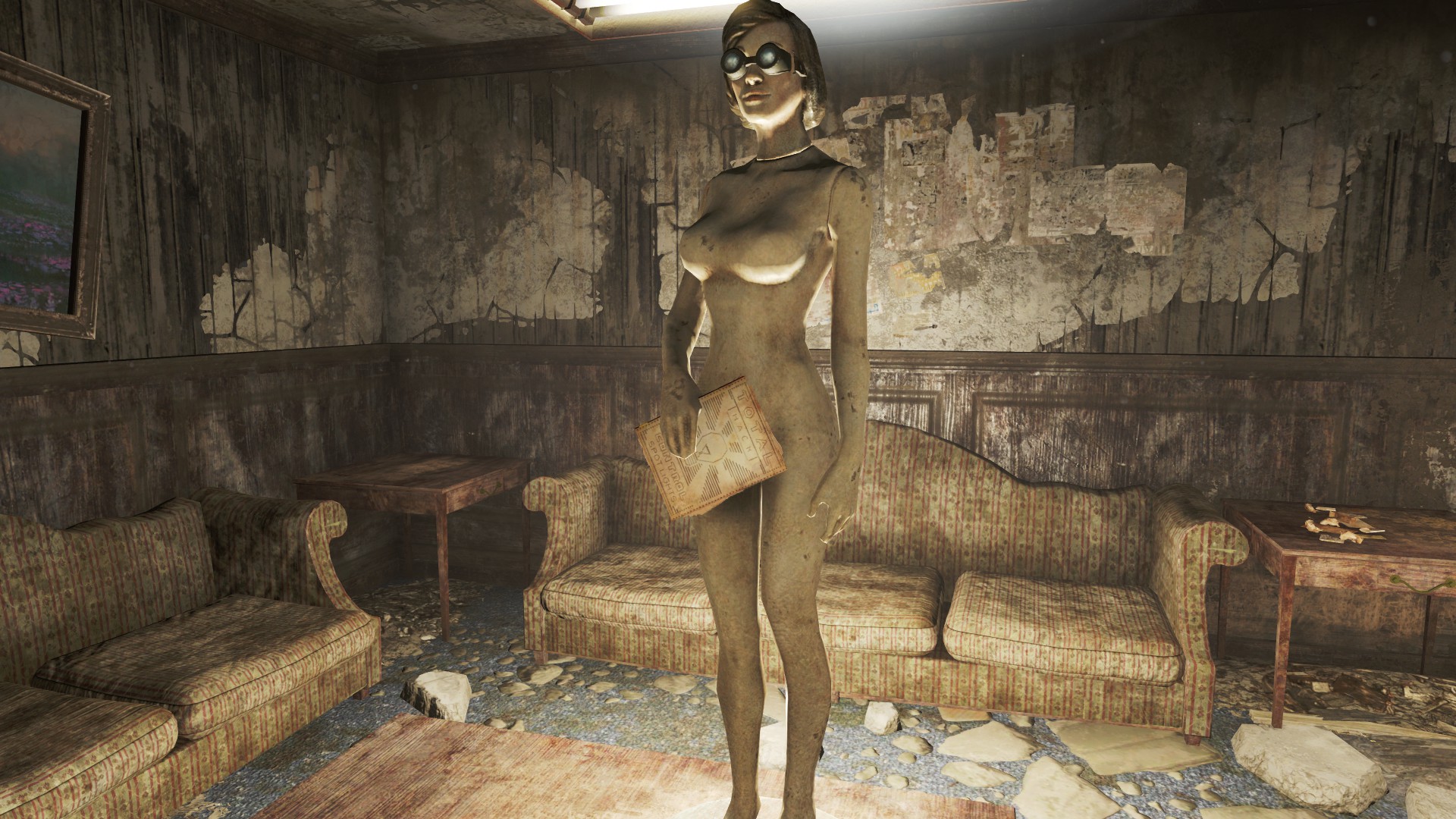 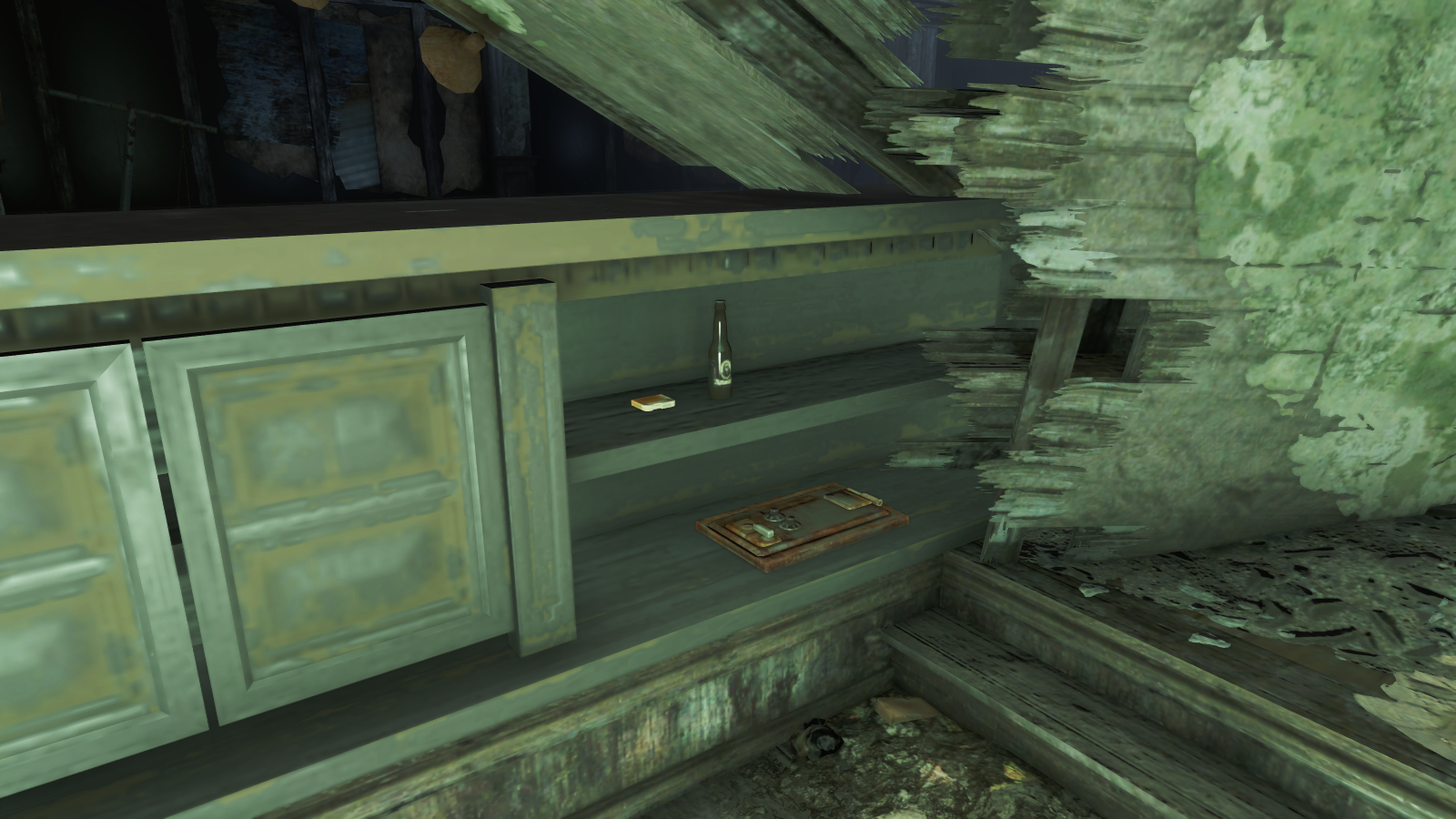 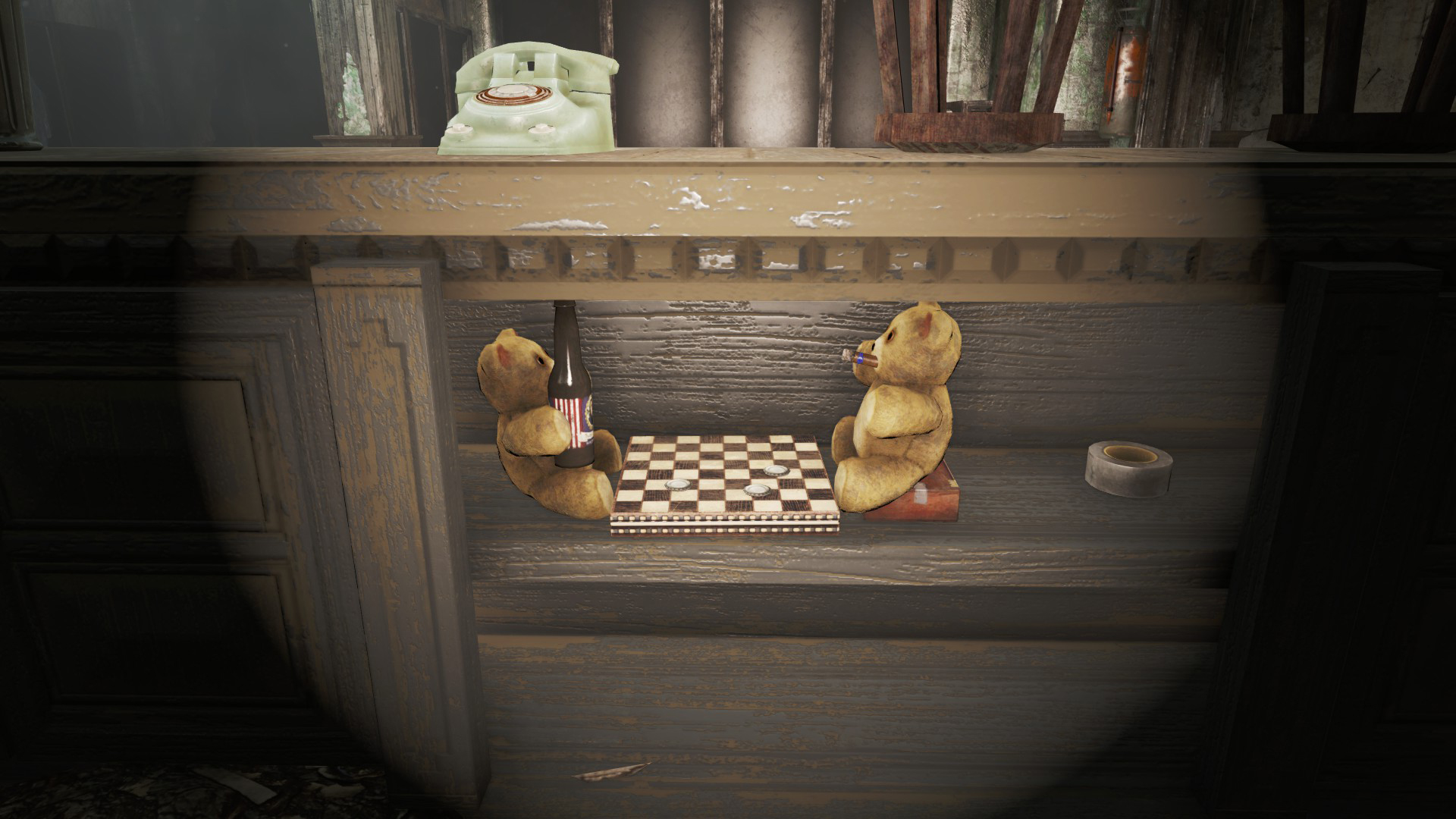 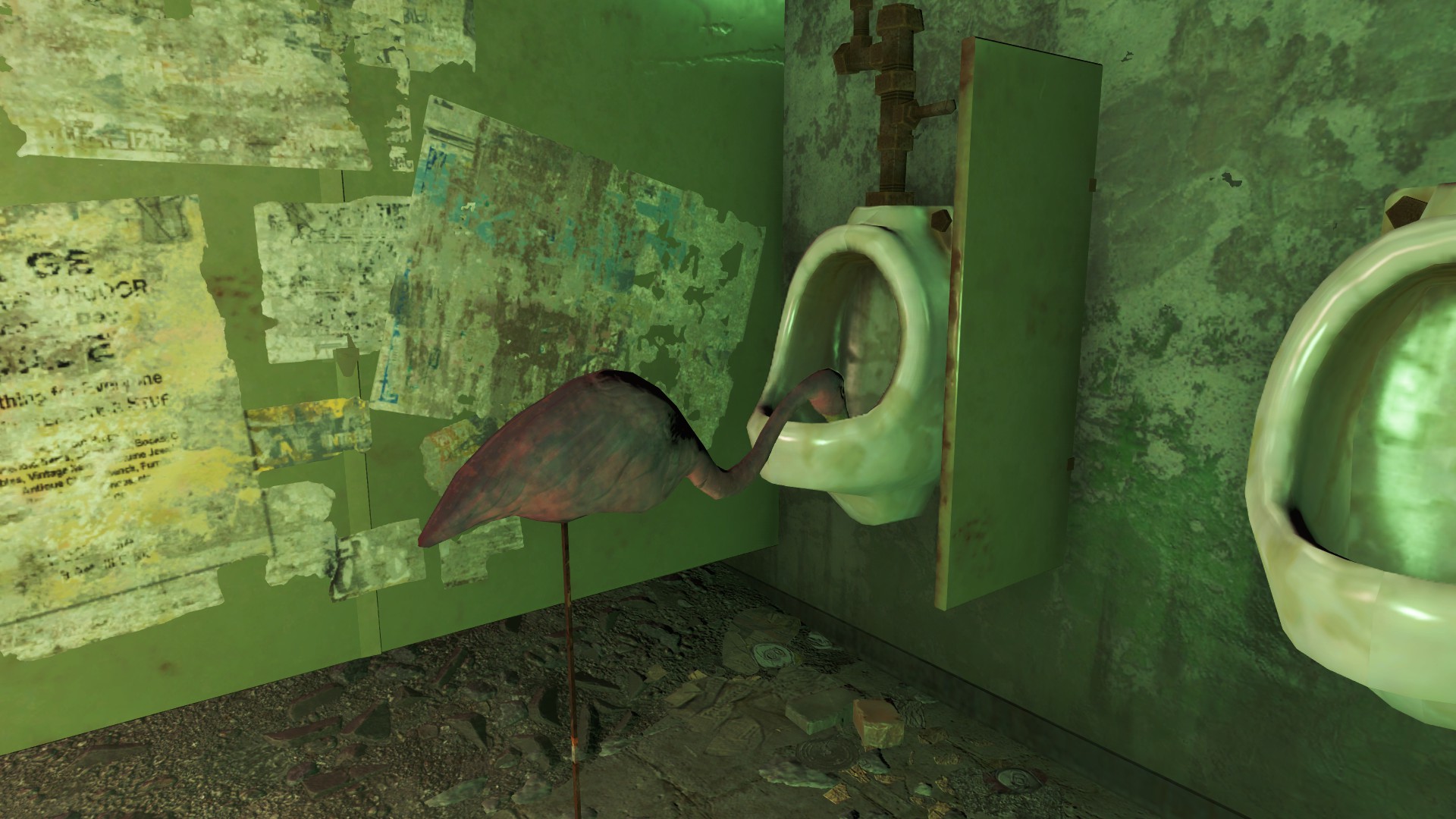 Flamingo drinking from a urinal
在此图库中添加照片