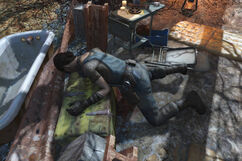 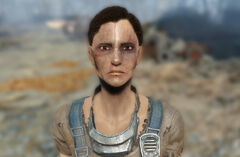 Zoe is a deceased merchant in the Commonwealth in 2287.

Zoe was part of a caravan traversing post-apocalyptic America in 2287. With the leadership of Jackson, the caravan specialized in mechanical repair and trade, using robots built from scavenged parts to protect themselves.

Her main job as part of the caravan was to set up defenses during the night, coordinating the placement of the robots and setting up defensive measures. Before her arrival in the Commonwealth, Zoe started a diary on a holotape to catalog her thoughts during the caravan's travels.

Zoe appears only in the Fallout 4 add-on Automatron.

Retrieved from "https://fallout.fandom.com/wiki/Zoe_(Automatron)?oldid=3284271"
Community content is available under CC-BY-SA unless otherwise noted.