The Zip is a vehicle found in the Commonwealth.

A vehicle produced before the Great War, one of two microcars alongside the Fusion Flea. The small, single-seated vehicle has three wheels. The engine sits in the back, behind the seat. In advertisements, a blue version is seen and red variants are seen in the wasteland.

The Zip appears in Fallout 4.

In the center of Malden 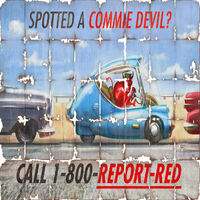 Advertisement for the "Blue Zip"