Fallout Wiki
Register
Don't have an account?
Sign In
Advertisement
in: Honest Hearts locations, Department of the Interior locations
English

The Zion Ranger station is a location in Zion Canyon in 2281. It is located to the northwest of Cueva Guarache.

Upon entering the building, geckos and/or bark scorpions will attack. There is a gun case behind the sofa to the immediate right of the entrance, containing a weapon and ammunition. To the left side of the entrance, there is a Milsurp Review magazine behind the knocked-down chair. Along the right wall is a fridge with some alcohol. There are also two crates towards the back containing some random items, including ammunition.

In the back room are two footlockers: one with random junk, and one that is locked (average) containing a weapon, ammunition, and a couple of aid items. On the side of the room with the dresser, just on the other side back in a corner, is an ammunition box. On the table is the medical supply kit for the Tourist Trap quest. However, it is contaminated. With a Medicine skill of 35, it can be sterilized with one bottle of alcohol from the fridge mentioned above. Otherwise, the player character can take what is there, salvage it, or leave it. Across from the table by the bunk bed is a duffle bag.

On the roof is a lawn chair with a skeleton sprawled in front of it. There is a tomahawk stuck in the skeleton's back, as well as some .45 casings, a box of large pistol primer, and some pistol powder next to the chair. The station's roof can be accessed by jumping from the cliff on the north side of the building.

There are also three different types of hats; two are worn by the teddy bears on the mantel (may have fallen), and the other is in a duffle bag behind the bunk bed across from the table. The available hats are a cattleman cowboy hat, a rattan cowboy hat, and a rawhide cowboy hat. The desks all contain random loot.

There are three teddy bears above the fireplace; two of them are wearing hats. There is also some ammunition behind one of the bears.

The three teddy bears on the fireplace mantel 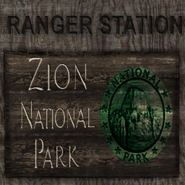