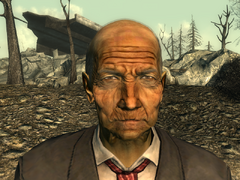 Zimmer without his glasses

“That's Doctor Zimmer to you! Miss... miss whatever-your-name-is. I'd have thought you barbarians would be more interested in advanced technology.”

Dr. Zimmer is the leader of the Institute's Synth Retention Bureau, who is temporarily staying at Rivet City in 2277.

The 58-year-old[1] Dr. Zimmer is the head of the Synth Retention Bureau. In 2277, Zimmer personally ordered tests and received results from the Institute's FEV lab lead scientist C. Syverson‎.[2] Syverson was unsure of why Zimmer had ordered the tests to begin with, and noted he was annoyed with the results.[2] That same year, Zimmer left the Commonwealth and journeyed south to the Capital Wasteland in search of a missing android. Accompanied by his android bodyguard, Armitage, he made his way to Rivet City in the hopes that fellow scientist Dr. Madison Li could assist him in his search for his missing property.

Upon arrival to Rivet City and its science lab, Li personally refused him the right to speak with her,[3] a conversation that had to be reiterated by her assistant, Anna Holt, citing that his constant interruptions were interfering with Li's hydroponic developments. Despite being refused assistance he remains within the lab, refusing to leave until Li "stops playing with her chemistry set and starts talking real science."[4] He later asks for help from the Lone Wanderer to help him find his missing android.[5]

As of 2287, Zimmer remains missing in action, with Justin Ayo filling his position at the SRB. According to Ayo, Zimmer is reclaiming "high profile" units in an unspecified location.[6]

The Replicated Man: Zimmer wants the Lone Wanderer to hunt down a rogue android.

If Zimmer is convinced the android is dead, he will leave Rivet City and disappear from the game.

A voice type exists for Zimmer in the game files of Fallout 4. Based on its form ID, Zimmer was originally slated to appear as a fully-fledged NPC in the Institute itself, though this was changed at some point in development.[7]