Zetans[1][2] are an extraterrestrial alien civilization.

Zetans abduct humans and creatures and collect world objects for study, cryogenic preservation, and experimentation. Zetans arrived near Earth on two motherships to study the Earth, one known as "Zeta" and another unnamed one.

They have continuously abducted humans and other creatures from Earth, and also collected their technology. It was not until the abduction of Colonel Hartigan and the Clarabella 7 capsule, that their influence became felt by modern society, with groups such as Quaere Verum formed to reveal the truth about them, though Quaere Verum was widely regarded to be a crackpot conspiracy group by the public. Quaere Verum attempted to use the MPLX Novasurge, a prototype plasma pistol somehow recovered by the group from the government, as proof that the U.S. government had been using alien technology, though the weapon was later recovered by the Zetans themselves, while the group itself was dismantled by the federal government for their role in stealing the weapon. At this point, it was believed by many that the Enclave had based much of their technology on alien technology.[Non-game 1][Non-game 2] Everyday citizens also had some awareness of the Zetans, given that some comics featured images of the Zetans on their covers, and mentioned them by name.

In late pre-War Appalachia, the Zetans operated through a network of Zetan agents who captured individuals in the wilderness around the town of Flatwoods for experimentation. One such person was the Assistant Chief Executive Officer of Vault-Tec, who was inspecting the construction of Vault 76 sometime between 2064 and 2069. These alien agents were often spotted and reported by Flatwoods locals, some of which claimed to have been abducted, though local law enforcement did not take the sightings seriously. The Zetan agents were dubbed the "Flatwoods Monster" by the locals and the media. These Zetan agents continued to operate in Appalachia at least up until 25 years after the Great War. The Enclave also maintained a research facility in Appalachia where they studied the Zetans.

In other places across the pre-War United States, up until shortly before the Great War, the Zetans continued to abduct humans. In 2041, they abducted the Professor of Anthropological Archaeology at Banfield College, Humboldt, Oregon. Other known abductees included a U.S.S.A. linguistics specialist, a U.S. senator and someone within the White House who had the codes needed to launch the entirety of the U.S.'s then-currently-armed ICBM nuclear weapons. During the Reclamation of Anchorage, Alaska (as part of the Resource Wars), somewhere between 2066 and 2077, numerous U.S. Army personnel were abducted from Alaska by the Zetans, including a U.S. Army combat medic and his entire unit.

After the Great War, the Zetans began abducting, studying, and experimenting on the new creatures from the Capital Wasteland, including super mutants, feral ghouls, brahmin and many others. They also abducted members of the new groups of people formed after the war, including raiders and slavers. The "Flatwoods Monsters" also continued to operate in Appalachia for at least 25 years. Other groups across the wastelands seem to have had some awareness of the Zetans, as both the Brotherhood of Steel, Brotherhood Outcasts, and the Enclave had alien power cells in their respective armories.

Sometime around 2277, the Lone Wanderer encountered an alien signal that led them to a downed Zetan recon craft known as Theta. On approach, they were abducted via a tractor beam onto Zeta. From there, they were experimented on and then placed in a containment cell, where they joined with several other abductees, including the aforementioned slaver, combat medic, samurai and cowboy, as well as a young pre-War girl, in order to take over the ship and find a way back to Earth. The crew fought their way through Zeta, destroying its generators and fighting all the way to the Zetan captain's cabin. After slaying the captain, the crew took control of the ship and engaged in a final showdown with the other unnamed mothership. After destroying the other mothership, the crew went their separate ways, with the combat medic and young girl staying aboard the ship and the rest leaving back to Earth. In 2287, a Zetan was spotted crash landing a UFO in the Commonwealth by the Sole Survivor. They breathe a similar atmosphere to humans, and subsist mainly on a diet of alien worms and squid.

The Zetans seem to have a strict society focused on work and progress, with no apparent concern for hobbies and personal pursuits. Their architecture is spartan and purely functional; for instance, their beds (called stasis chambers) are sterile metal capsules with no mattress, blankets, sheets or other pieces of bedclothes typically found in a normal human bed, and no discernible means of entertainment can be seen aboard Zeta. However, the Zetans appear to have some degree of emotion, because alien workers display obvious fear when confronted with armed assailants. In another case, the aliens are shown to have a fascination with Giddyup Buttercup, as demonstrated in a captive recorded log onboard Zeta, of Sally being taken to the recording room and noticing a Giddyup Buttercup. She notes that upon her calling attention to it, the aliens become very excited, though she has no idea why they act this way. The Lone Wanderer can also encounter what appears to be a sacrificial shrine to Giddyup Buttercup, where there is a large circular chamber, with the animatronic horse in the center surrounded by several human corpses.

Due to their frail bodies, the Zetans aboard Zeta generally rely on guardian drones, support drones and automated turrets to do most of their fighting. However, certain zetans appear to be combat ready soldiers, utilizing personal forcefields and force field generators for defense, atomizers and disintegrators for ranged combat, and shock batons for melee combat; all of their weapons are energy based. They also rely on support technology such as healing gels, weapon repairing epoxies, advanced healing archways and teleportation matrices. Lastly, they appear to employ genetically engineered zetan-human hybrids, known as abominations, as living weapons.

The bulk of their military capacity comes from the deathrays mounted on their motherships, which have payloads comparable to nuclear weapons. These motherships have energy shielding and are spaceflight capable. Motherships also maintain a hangar with a fleet of Zetan-piloted recon craft.

The name Zetans is based on Zeta Reticulans, the most commonly referenced aliens in popular culture. 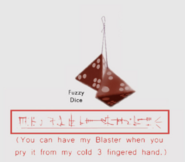 Concept art of a translated Zetan sentence and fuzzy dice