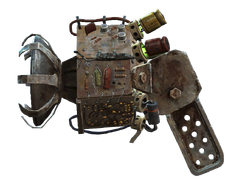 The Zeta gun is a weapon in Fallout 4 and a possible reward for completing The Secret of Cabot House.

The Zeta gun is a specially modded Gamma gun that does a low amount of damage without any special radiation poisoning effect. It is also significantly weaker than the Lorenzo's Artifact gun that can also be gained as a reward for The Secret of Cabot House. Because of these facts, it appears that this weapon might be an intentionally weak weapon to be used as a "consolation prize" of sorts for siding with Lorenzo instead of Jack (though siding with Lorenzo also gets the player character a replenishable supply of the powerful Mysterious serum, which may more than compensate for the weakness of this weapon).

Jack's notes state that, as a mobile version of Lorenzo's psychic restraint, it may be used to weaken Lorenzo while fighting him. The drop in damage may be explained by the gun giving off "Zeta Radiation," a supposedly harmless energy to normal people, but to Lorenzo it can prove lethal.

Like the Lorenzo's Artifact, this is actually a normal Gamma gun with a unique mod (the Zeta dish); it is possible for the player to build the standard dish mod to restore the Gamma gun's original power, and apply the Zeta dish mod to another Gamma gun.

This section is transcluded from Gamma gun. To change it, please edit the transcluded page.

Retrieved from "https://fallout.fandom.com/wiki/Zeta_gun?oldid=3463876"
Community content is available under CC-BY-SA unless otherwise noted.