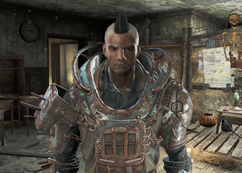 Judge Zeller is a raider leader in the East Boston Preparatory School in 2287.

Judge Zeller is a ruthless man leading a raider group known as "Zeller's Army," where he recruits people by torturing and brainwashing them. Investigating terminals inside the school, the Sole Survivor can discover various torture methods Zeller uses, such as burning soles of feet, tooth removal, beating and threatening to feed his prisoners to rats. He had an agreement with Bunker Hill not to hit any of their caravans, but he broke this agreement. This results in Kessler sending the Sole Survivor after him to deal with him and his gang.

Zeller appears only in Fallout 4.

Retrieved from "https://fallout.fandom.com/wiki/Zeller?oldid=3363274"
Community content is available under CC-BY-SA unless otherwise noted.