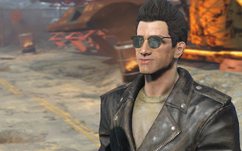 Founder and leader of the Atom Cats

“Are you writing a book? I'm the boss of the Atom Cats and souped up Power armor is my bag.”

Zeke is the founder of the Atom Cats living in the Commonwealth in 2287.

The founder of the Atom Cats, Zeke explains the club has the most weapon and armor modifications around. Zeke grew up in Diamond City until he left the settlement in dissatisfaction, referring to it as "a tilted square." He also claims to have fixed up a vertibird until it crashed into the ocean.[1] He eventually found the Atom Cats garage after slaying a large pack of feral ghouls residing there. Afterward, Zeke began recruiting the current members of the Atom Cats, most of whom came from troubled backgrounds in which he helped in reforming them by "[showing] them the way of cool."[2]

Zeke can offer to modify armor for the Sole Survivor, including power armor.

Zeke appears only in Fallout 4.

Retrieved from "https://fallout.fandom.com/wiki/Zeke_(Fallout_4)?oldid=3296103"
Community content is available under CC-BY-SA unless otherwise noted.