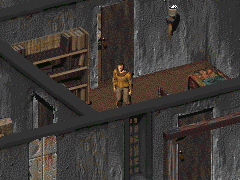 “Why don't you take a hint and get the duck out of fodge?”

He is an older man with thinning, white hair[1], but more importantly, the leader of the squatters above Vault 15.

Zeke, along with the other squatters, will initially be hostile and unwelcoming to the Chosen One. Once his trust is gained however, by rescuing Chrissy, one of the squatters, he will apologize for his earlier rudeness and reward the Chosen with a keycard for the Vault 15 elevator.

Zeke appears only in Fallout 2.

Retrieved from "https://fallout.fandom.com/wiki/Zeke_(Fallout_2)?oldid=3072885"
Community content is available under CC-BY-SA unless otherwise noted.