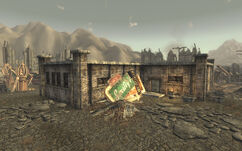 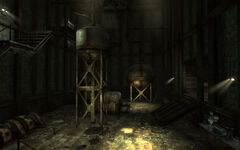 Zapp's Neon Signs is an unmarked location in the Mojave Wasteland. It is inhabited by Fiends.

There are three main areas: the entrance office, the workshop, and the foreman's office.

In the entrance office there is a rigged terminal and a trip wire/grenade bouquet at the top of the stairs. At the bottom of these stairs lie three frag mines before entering the workshop. There are also two skill magazines on a small table near the toilets.

Beware of the frag mine at the bottom of the stairs. There are three workbenches on the right-hand side of the room. Up the stairs to the left are several armed frag mines. There are also several Fiends in the workshop area.

The steps leading to the foreman's office contain three fire extinguishers on the stairs, which are all sitting next to frag mines. At the top of these steps is a fiend named Duke, who guards the foreman's office and the loot inside. Duke is scripted to shoot at the extinguishers at the bottom of the stairs coming from the office area once the player gets near enough and even without being detected, which will set off the nearby mines with the explosion.

In the foreman's office on the foreman's desk is an easy locked computer. Containing two shipping invoices and an accident log. There's a first aid box on the wall to your right, and two Nuka-Cola Quartz on the shelves with a copy of Boxing Times and a Lad's Life skill magazine.

This location resembles the real-life Neon Museum, an outdoor exhibition space which houses and preserves iconic Las Vegas signs from the past. The Main Collection, known as the Neon Boneyard, contains more than 200 unrestored signs, some of which are still in working order and illuminated at sunset.[1]

Feet of statues can be found in the backyard

Bumper sword
Add an image to this gallery

Cite error: <ref> tags exist, but no <references/> tag was found
Retrieved from "https://fallout.fandom.com/wiki/Zapp%27s_Neon_Signs?oldid=3061106"
Community content is available under CC-BY-SA unless otherwise noted.