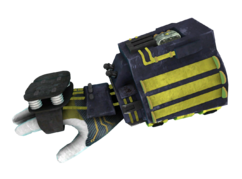 The zap glove is a weapon in Fallout: New Vegas.

Visibly it appears as a blue and yellow-colored metal gauntlet with an electrified plate wrapped around the fingers, which emits a burst of electricity when striking an object. A critical hit emits a more powerful blast. Its electrical nature makes this weapon especially effective against robots and (to a lesser degree) enemies clad in most forms of power armor.

The zap glove can successfully strike about 495 times from full condition before breaking.

Sometime before release, zap gloves, as well as many other unarmed weapons, were supposed to use energy cells as ammunition, but it wasn't supported by the game engine and there was not enough time for implementation.[1]

The unused icon for the zap glove