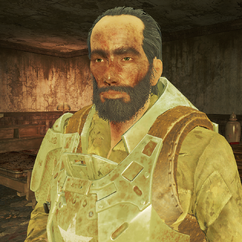 Zachariah is an ex-Gunner in Nuka-World in 2287, and can be encountered inside the Grandchester Mystery Mansion.

Zachariah, a former member of the Gunners, ditched his squad at the Mass Pike Interchange because he was sick of taking orders from Winlock and Barnes. He claims he is happy he found the haunted house and that he wanted to set up deadly traps because he thought it was a joke of an amusement.[1]

Over the time he had been in the house, Zachariah claims to have killed a member of the Minutemen and a family. He was happy with the loot he took from the Minuteman's corpse but found the family's lack of necessary weaponry in the wasteland foolish.[2]

At some point during his tenancy, a group of wastelanders almost killed him. This made him set up even more traps. Zachariah managed to also cut a deal with the raiders at Nuka-World to sell his loot to them, which he was happy about due to his lack of food or water.[3]

At some point, the ghost of the little girl in the house started to appear. Zachariah noticed this but assumed it to be the assaultron malfunctioning.[4]

He becomes hostile upon encountering the player character.

Zachariah appears only in the Fallout 4 add-on Nuka-World.

Retrieved from "https://fallout.fandom.com/wiki/Zachariah?oldid=3256953"
Community content is available under CC-BY-SA unless otherwise noted.