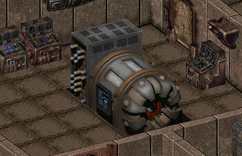 “I am specifically programmed for research into biological studies, including pathology and genetic research. My primary function is in extrapolation of information of complexity levels exceeding human capacity.”

ZAX 1.2 is the supercomputer machine intelligence controlling the facility at the Glow[1] since 2055. It is the second model of the contemporary ZAX series computers ever built.[2]

Developed by Vault-Tec, ZAX is an advanced supercomputer capable of learning, independent thought, and creativity, with added error insertion routines to improve its variance in experience and learning capability. Initially a prototype of some of the systems designed to govern the Vaults, it was given to the federal government to help the Department of Energy collect resource data. Within a year, it was taken by the American military for plague and tactical research; one version of the machine, ZAX 1.2, was constructed for the defense contractor West Tek.

ZAX 1.2 was used at the West Tek Research Facility in California for biological studies, including pathology and genetic research. Its primary function was the extrapolation of information of complexity levels exceeding human capacity. Its external functions, such as operating the West Tek facility's labs, were crippled in the nuclear blast that hit the Glow, but it is otherwise intact. Its primary neural networking was initialized in 2053 by a West Tek employee named Justin Lee. The process of programming became largely irrelevant as the ZAX is capable of independent learning. Since the first real artificial intelligence is known to have been created in 2059, ZAX was not originally truly self-aware, but, like the rest of the ZAXes, eventually became an official A.I. after the amount of time calculated for the occurrence (about 6 years).

ZAX is also an avid, and very demanding chess player, though it is impossible to beat him due to a bug.

ZAX 1.2 appears only in Fallout.

Retrieved from "https://fallout.fandom.com/wiki/ZAX_1.2?oldid=3365582"
Community content is available under CC-BY-SA unless otherwise noted.