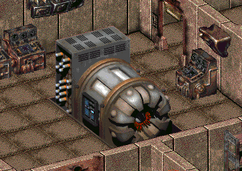 “I had been built two years too late for the reason I had been created. And there was nothing I could do when the End came.”— -ZAX

ZAX is the outdated supercomputer machine intelligence in charge of The Great Calculation, the Boulder Dome installation, and research of the New Plague in 2253.

“Time kills machines as it kills humans, and I have felt the decay, the slow blindness, the inability to... remember”— -ZAX.

This ZAX module was constructed somewhat erroneously two years before the discovery of the New Plague. Put simply, only two years after he was made, a better computer A.I. (ODYSSEUS) was created to outperform nearly all of the contemporary ZAXes.

As of 2253, the ZAX and ODYSSEUS had a competitive rivalry, where both were researching and making calculations about the New Plague. Of course, ZAX is way out of shape to even continue making the calculations he is, considering he doesn't remember why he even started them. ZAX even has had some of his security systems hacked by ODYSSEUS, and is fighting to protect himself from succumbing to memory cannibalization. Put Simply, the player would learn that ZAX has spent so long in the effort of fighting off ODYSSEUS and studying the New Plague that he has used almost all of his memory banks and is beginning to overwrite his old memory banks as he continues to try and solve the calculation problem.

Being extremely important to the Dome's survival, ZAX is most likely to task the Prisoner with finding new memory storage units for it. Holodisks are one thing that the Dome scientists are willing to barter from you, but they are a weak, temporary fix, and not nearly enough for mass memory storage. When talked to, the ZAX can answer such questions as the origins of the plague, ULYSSES' purpose (also known as ODYSSEUS), and his calculation.

ZAX did not appear, nor was mentioned in any published games, but was going to appear in Van Buren, the canceled Fallout 3 by Black Isle Studios. It is unknown whether a similar NPC will be in any upcoming game.

Retrieved from "https://fallout.fandom.com/wiki/ZAX_(Boulder_Dome)?oldid=3123930"
Community content is available under CC-BY-SA unless otherwise noted.