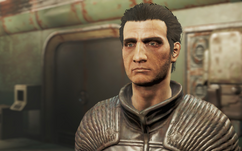 Z2-47 is one of The Institute's elite Coursers in Fallout 4.

Z2-47 is an Institute Courser, designed for high-risk assault and retrieval operations above ground. During 2287, he is tasked with retrieving a Gen 3 synth; designation K1-98. K1 however was captured by a group of Gunners and taken to their base at Greenetech Genetics, but this did not stop the ruthless Courser as he charged into the facility; killing a large number of Gunners in his way until he reached the synth - but before he can get her, he meets his final foe; the Sole Survivor. 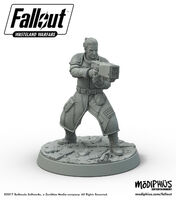 Z2-47's model for Fallout: Wasteland Warfare
Add an image to this gallery
Retrieved from "https://fallout.fandom.com/wiki/Z2-47?oldid=3024806"
Community content is available under CC-BY-SA unless otherwise noted.