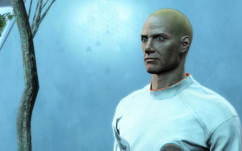 Z1-14 is a synth living in the Institute in 2287. He is instrumental during the finale of the Railroad questline.

Z1-14 was created some point before 2287. He met Liam Binet sometime before 2287, and ended up becoming instrumental in saving synths for the Railroad. If one sides with the Railroad, the Sole Survivor helps Z1 in gaining weapons for the synths that wanted to escape.

Retrieved from "https://fallout.fandom.com/wiki/Z1-14?oldid=3124515"
Community content is available under CC-BY-SA unless otherwise noted.