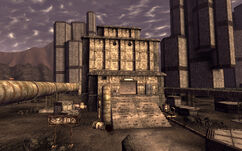 “Spending a lot of hours getting the Vera Keyes hologram looking right. I'm a physicist, not a sculptor - iterating on her facial features and her dress to match Sinclair's expectations... it's about enough to make me file a complaint. I don't get the sense Sinclair's doing this out of love or well, lust.”— Z-38 lightwave dynamics research terminal entry

The Z-38 lightwave dynamics research is a location in the western part of Big MT in 2281. It is located southwest of the Z-43 innovative toxins plant.

The area is guarded by lobotomites and a pack of night stalkers. The interior has a couple patrolling non-hostile holograms and a terminal which makes references to Frederick Sinclair from Dead Money.

Recipes - Energy Weapons skill book under a monitor, top catwalk
Add a photo to this gallery
Retrieved from "https://fallout.fandom.com/wiki/Z-38_lightwave_dynamics_research?oldid=3309275"
Community content is available under CC-BY-SA unless otherwise noted.