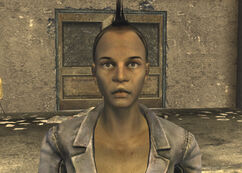 Ammunition for the Scorpions

Yvette is the Scorpions gang leader living in the Monte Carlo Suites in 2281.

Not much is known about Yvette. She is the main one in charge of the small-time raider gang known as the Scorpions, who are involved in slinging chems within and out of the Vegas area.[1] Petty and overconfident, the actions of the Scorpions frequently get themselves into fights with the Fiends.[2] Like other raider gangs, the Scorpions will attack strangers on sight.

Retrieved from "https://fallout.fandom.com/wiki/Yvette?oldid=3242456"
Community content is available under CC-BY-SA unless otherwise noted.