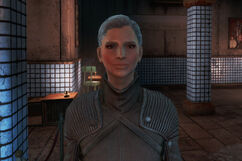 Yuki (S.N.O.W.) is an artificial intelligence in a Gen-3 synth body in the Fallout 4 Creation Club content "Neon Flats."

Yuki, otherwise known as S.N.O.W., is an Institute artificial intelligence created by an Institute scientist known as the Architect to find solutions to problems without "traditional human design and input." S.N.O.W. was moved to an abandoned apartment within Goodneighbor to continue testing where she started to become more independent and began showing signs of free will. This caught the attention of Dr. Liam Binet who encouraged her independence and told her she could become free from the Institute. The Architect, becoming greatly disturbed by S.N.O.W.'s increased signs of free will decides to have her reset and her self-learning algorithm restricted and sends an Institute SRB clean-up crew to the Goodneighbor apartment where she was being kept.

With the aid of Liam Binet, S.N.O.W. incapacitates the clean-up crew and escapes the apartment to the Electrical Hobbyist's Club where Liam had a Gen-3 synth body placed for her to upload her databanks into. The Sole Survivor finds S.N.O.W. in the basement of the Electrical Hobbyist's Club while she was uploading herself into the synth body and either decides to disrupt to connection or let S.N.O.W. upload herself into the synth body. If she is spared by the Sole Survivor she heads to the Goodneigbor bar The Third Rail and she thanks the Sole Survivor for letting her become a synth.

Yuki (雪) is a Japanese word that can mean "snow," which is where the S.N.O.W. designation comes from.

Add an image to this gallery
Retrieved from "https://fallout.fandom.com/wiki/Yuki?oldid=3279451"
Community content is available under CC-BY-SA unless otherwise noted.